We invite you to share your questions, comments and concerns with us so that we can represent industries views when we talk with officials.  If you’d like to discuss the changes in person, please also get in touch direct, or you can email us on haveyoursay@connexis.org.nz

Have your say say on the COVE

You are invited to register your  Expression of Interest for establishing a Centre of Vocational Excellence: Construction and Infrastructure.  Please click the button below and email the following details to ConstructionInfrastructureCoVE@manukau.ac.nz by noon on Tuesday 17th March


The number of Workforce Development Councils (WDC) has been confirmed as six.  There are no surprises for us with the Construction and Infrastructure WDC confirmed.  As you will know, we have been working with BCITO since the initial RoVE announcements with the understanding that our full coverage, along with BCITO’s would transition into one WDC.  There will be other industries that will come into our WDC from other ITOs and the details will be confirmed.  There will continue to be consultation on the establishment process and governance with industry voice critical.

The selection and make-up of the WDCs is a key decision in the reform of vocational education.

“These new WDCs will ensure industry takes the lead in making sure learners develop the skills they need to be ready for the world of work,” Education Minister Chris Hipkins said.

“The areas of coverage for the six WDCs will be:

“The WDCs group industries and sectors logically and are based on the business community’s favoured model and the way that secondary schools think about vocational education.

“Combined, they cover most of the industries that employ around two and a half million people in half a million businesses across New Zealand,” Chris Hipkins said.

“Once established, the WDCs will take over some of the key functions of the current Industry Training Organisations (ITOs). These include ensuring training qualifications meet industry standards and that courses that are taught are relevant and up to date.

“Unless a training or education programme has the confidence of industry through its representation on a WDC it won’t be approved or funded.

“The other current role of ITOs – the responsibility for day-to-day support for apprenticeships and other on-the-job training – will shift from ITOs to the Institute of Skills & Technology and other providers such as wānanga and private training establishments.”

Chris Hipkins said the Government had been tasked by industry to move quickly to establish the WDCs, to provide sufficient time to plan for the changeover.

“This is a key decision and follows extensive consultation with industry groups, employers and ITOs since August. It follows industry preference as much as possible.

“In addition to forming more logical groupings, WDCs will bring a number of new industries or sectors not currently covered by ITOs. These industries, which include web and graphic design, fashion, ICT and teacher support qualifications, will now have a powerful industry voice.

“The final coverage areas for WDCs and their names will be agreed though Orders in Council. The current coverage descriptions for each WDC are working titles only, as is the New Zealand Institute of Skills & Technology” Chris Hipkins said.

Commencing early in the new year, the next steps on the establishment process for WDCs include:

The establishment of WDCs will be enabled by the passing of the Education (Vocational Education and Training Reform) Amendment Bill. There will then be a transition period until 31 December 2022, to allow time for functions to transfer to the new WDCs and providers.

“We’ve assured the vocational and education sector that implementing these changes will not be rushed and we will build a phased, gradual transition process to minimise disruption,” Chris Hipkins said.

The final coverage areas for WDCs and their names, below, will be agreed though Orders in Council.

Q. When will the changes happen?
A. Workforce Development Councils will be developed from April 2020 and will be in place by June 2021.

Some ITOs trainees will begin to be transferred across to NZIST or other providers from 2021 and this process will be completed for all ITOs by December 2022.

Q. I am currently a Connexis trainee or apprentice, will I still get the same support from Connexis?
A. Yes, Connexis will continue to support you and your training through the transition period.


Q. My training will go beyond 2022, who will be support me after 2022?
A. This will transfer to NZIST or another provider. The Government has pledged sufficient resources to ensure the transition will be well managed and not adversely affect your training.

Q. I am an employer looking to start a new apprentice or trainee, do I now sign them up with NZIST or another provider?
Connexis will continue to enrol trainees and fully support them through the transition.


Q. Who will look after the Civil Trade Certification scheme in the future?
A. It is likely that this will be administered directly by the relevant Industry Association after the transition. Connexis will continue to manage this in the interim.


Q. The changes are designed to give employers a greater say in industry training. As an infrastructure employer how do I have my say?
A. The Workforce Development Councils (WDCs) will be employer led organisations representing the needs of employers in industry training. There will be six WDCs including a Construction and Infrastructure WDC. This will bring together related industries currently looked after by a number of ITOs.


Q. What is happening with fees-free?
A. The Government is committed to delivering on its promise of fees-free for the first two years of industry training (subject to eligibility criteria) for its current term of government. So we expect that fees-free will remain in place for 2020.

Q. Will these changes effect the fees I pay?
A. As part of the changes the Government is developing a new funding system which will cover all vocational training. Details on this are not yet available so at this stage we can’t say how this will effect fees. In the short term Connexis are not planning changes to our current fees.

Q. If we want to have a new qualification developed for our industry learners in the future who will we talk to?
A. Once the Construction and Infrastructure Workforce Development Council has been established then they will take over responsibility for developing new qualifications and updating existing ones. In the meantime Connexis continues to do this work for our industries.

Q. Where will I go for advice on training courses available for my industry sector?
A. The Workforce Development Councils will offer advice and advisory services to employers


Q. I have read about “capstone assessments” as part of the changes. What are these and will this affect me?
A. A Capstone Assessment is a final rounding off event to assess the cumulative leaning from the course or training. It could be a final assignment, a portfolio of work, a final written test or assessment discussion.

The use of these in future will be determined by the Workforce Development Council in consultation with industry.

Q. Who will be responsible for promoting careers in the Infrastructure industry in the future?
A. The Construction and Infrastructure Workforce Development Council will work with our industries to promote infrastructure careers. Funding for these activities is likely to come direct from industry.

The key changes the Minister of Education announced on 1 August 2019 are: 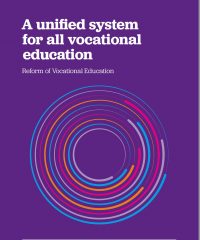 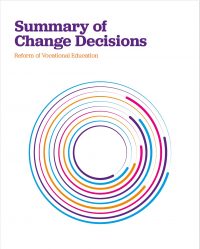 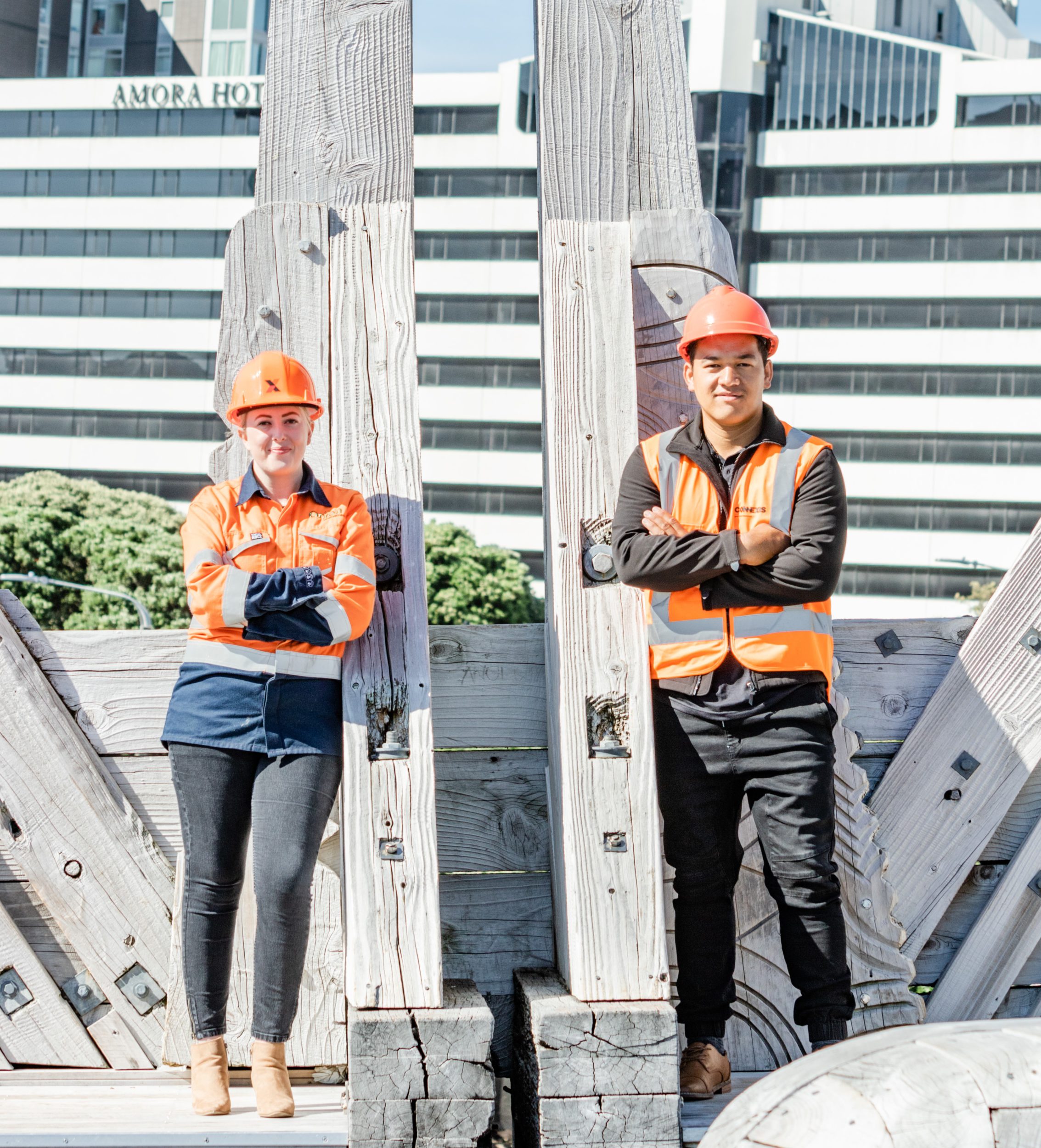 The Ministry of Education and the Tertiary Education Commission (TEC) will now work through relevant legislative changes and with Māori, employers, learners, industry and the education sector to continue the design and implementation that will deliver on the Government’s vision.

In August the Minister of Education announced funding for a Construction Centre of Vocational Excellence (CoVE). The Tertiary Education Commission (TEC) is the government agency responsible for allocating funds to establish the CoVEs.

In December, the CoVE’s project team will invite expressions of interest from groups interested in forming a Construction CoVE.

Leading up to December there will be a series of workshops where you can find out how a Construction CoVE can add the most value to the vocational education system. They want to hear from industry experts and employers, vocational education groups (ITPs, ITOs and PTEs), iwi, researchers and peak bodies about the issues and opportunities that a Construction CoVE could address.

The workshops will provide an overview of CoVEs and the selection process for consortium groups. They will then focus on participants’ views on the key sector issues and how the Construction CoVE should be structured.


We have held a number of regional forums around New Zealand to learn more about your views so we can best position the infrastructure sector for the changes ahead.

We are currently receiving survey feedback from our forum attendees to further assist us in understanding how our industry would like to proceed. If you attended a forum our survey is open until Friday, 8 November.

This consultation followed the national Kōrero Mātauranga / Education Conversation launched in 2018, and two reviews: the Vocational Education and Training (VET) system review and the ITP Roadmap 2020. A factsheet outlining these is available on the Kōrero Mātauranga website.

During the consultation we received 2,904 submissions, and met more than 5,000 people in approximately 190 conversations. What we heard has been fundamental to shaping the change programme for vocational education that has now been agreed. More information is available in What we heard: Summary of public consultation and engagement.

The Reform of Vocational Education represents the most significant set of changes for the tertiary education sector in more than 25 years. The level of engagement we received – from stakeholders of diverse cultures, occupations, educational backgrounds, regions, genders and walks of life – demonstrated just how important these changes are to New Zealand, both now and for the future.

The Government invited ITOs to provide their feedback. Connexis consulted with industry and prepared a submission.

We held meetings in the following locations and collated the feedback into our submission.

Connexis then submitted feedback on the proposed changes to the Vocational Education Sector.

This submission is available to view.