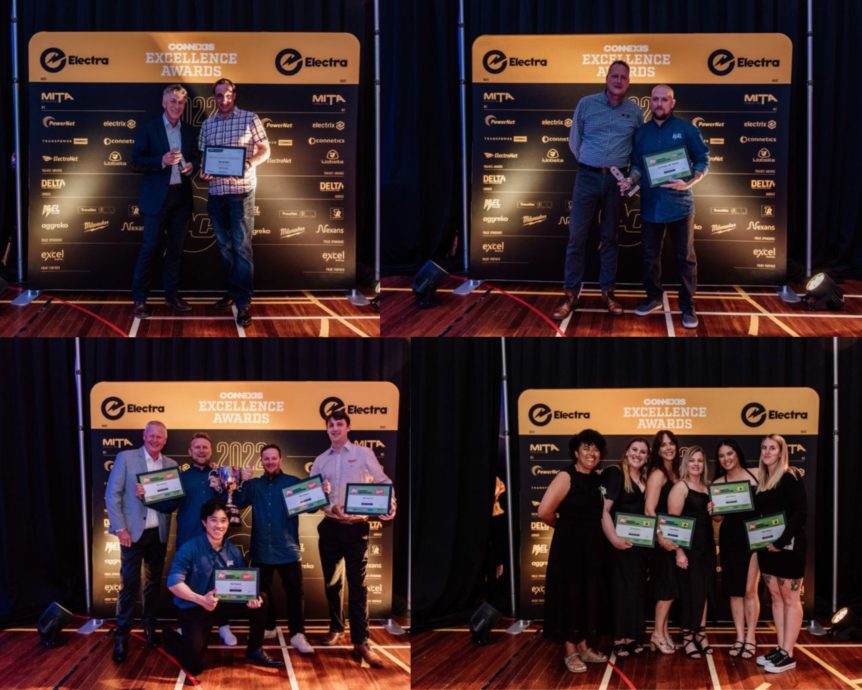 Wellington, 2 October 2022: Competition was intense at this year’s Annual Connection in Levin culminating with the electricity supply and telecommunication industry’s shining stars being recognised at the annual Excellence Awards.

The Awards were held after the final day of competition which saw line mechanic crews and cable jointers from around the country pitting their skills against each other, displaying the latest industry best practice and technological innovation.

Annual Connection is managed by Connexis, the infrastructure division of Te Pukenga Work Based Learning, with 2022 event sponsor Electra. It is the first time since 2019 companies have been able to gather and complete, after two years of Covid disruption.

Connexis Director Kaarin Gaukrodger says the skills and training on display in both the competitions and among the annual Excellence Awards winners were evidence of the importance industry place on vocational training to meet workforce skills requirements.

“This year’s Annual Connection was met with anticipation and increased comradery and of course keen competition.  The teams were eager to show New Zealand what the ESI is all about and the skills they bring to keep the lights and power right across Aotearoa on.

“The event is also an opportunity to show students and others considering new careers, that these are dynamic, interesting, skills-based jobs that can set you up for life,” Gaukrodger says.

Van Groen, who also won Advanced Trainee of the Year, is described by his employers as highly efficient with a diverse skillset and a passion for learning that allows him to “muck in” on almost any job. It’s the same attitude that saw Rob complete his four-year apprenticeship programme in just 2.5 years.

In nominating Rob for the Excellence Awards, Connetics general manager – Canterbury operations, Graham Fairbrass said: “Despite still being relatively early on in his career, Rob is already a top protection technician who continues to make a positive difference within Connetics and the wider industry.”

Van Groen found his way to becoming an ESI trainee after leaving school and switching jobs several times. What he loves most about his work these days is the “constant change in the types of work, and the learning of new equipment”.

The line mechanics competition at Annual Connection was fiercely contested with Wel Networks winning.  For the first time in the history of the event an all-female team, competing under the Ultimit Women in Infrastructure brand, competed taking out a credible second place.

“Having missed out celebrating our 10-year anniversary of Ultimit – Women in Infrastructure, due to Covid-19, we worked with industry to support an all-women’s team in the line mechanic event, for the first time. This marks the excellent mahi the electricity supply industry has put into reviewing their recruitment and operating procedures to attract gender diversity within their workforce,” Gaukrodger says.

The all-women line mechanic team was made up of women who work for Electrix in Auckland and Unison in Hastings and Rotorua.  Laisa Pickering, from Electrix Auckland is the team manager.

“Supporting Annual Connection was an easy decision for Electra to make as the event celebrates excellence in the lines industry and promotes to the community some of the difficult tasks carried out in all weather and sometimes under great pressure.”