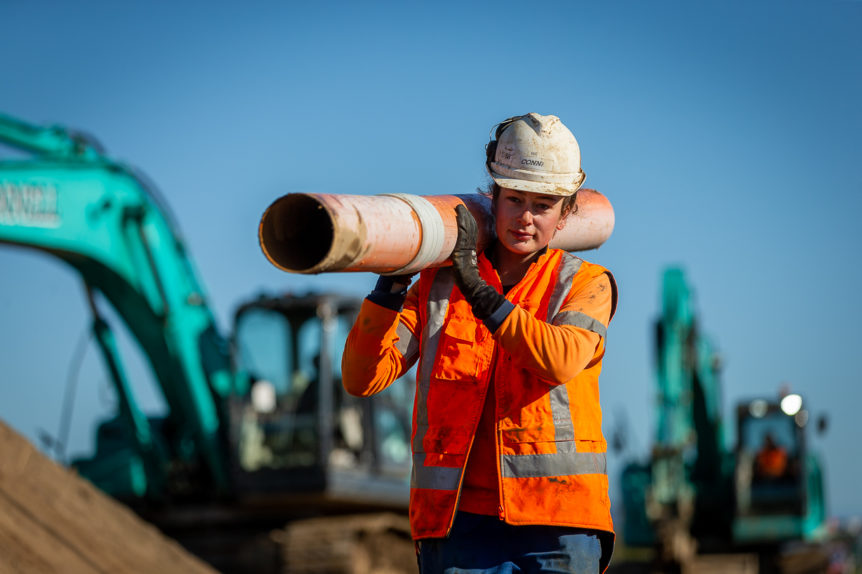 Putting in place a formalised qualification and competency pathway for infrastructure workers to follow in pursuit of skills and career options is central to plugging the current gap between workforce capabilities and growing industry demand.

A mind shift is needed to take advantage of the opportunities.

COVID-19 and border restrictions, an ageing workforce, and recruitment opportunities in other industries such as construction and primary industries, are creating challenges with the talent pipeline in infrastructure. Employers, along with central and local government, are realising that upskilling the domestic workforce to become qualified and competent tradespeople is a core element of a sustainable infrastructure industry in New Zealand.

This requires a planned approach with ongoing investment to build skills for both current and future demand rather than searching amongst the current pool of skilled workers to meet immediate needs.

It is clear that a skills shortage is a major barrier to meeting the demands of infrastructure projects. From pressure on our roading and public transport systems caused by population growth and ageing assets, to the challenges climate change pose to the energy sector, work is needed to make the infrastructure that keeps our communities healthy, connected and future fit.

The scale of the problem is possibly most acutely noticeable in the three water sectors of drinking water, wastewater and stormwater. “No-swim” notices at beaches, boil notices for tap water, erupting sewer pipes and lead contamination in water are among the issues that have been making headlines in recent years.

Government estimates reveal a $120 billion to $185 billion hole in water infrastructure over the next 30 years.

It is figures like this that have prompted the Three Waters reform programme. The reform proposes to centralise the sector by creating four publicly owned water entities. Regulatory changes have also been brought in to improve safety, reliability and affordability, with stricter quality control measures and greater consistency across water suppliers.

The regulatory measures include the creation of a new standalone water regulator, Taumata Arowai, and legislation to ensure water workers are experienced, qualified, and have a prescribed set of skills. The Water Services Act 2021 for the first time puts skills mandates in place, with a unified competency framework across the water sector.

Nick Hewer-Hewitt, Network Performance Manager for Wellington Water, says the Act is a positive step for the industry, “acknowledging the key role frontline workers play in the public health system”.

He says it puts requirements on the whole spectrum of people working with drinking water assets to prove themselves competent to adequately manage and respond to risk.

Yes, the regulations are primarily about improving the safety and quality of New Zealand’s water supply, but Nick says they will have positive impacts far beyond that.

From labourer to qualified professional

He says they elevate the water industry to a profession.

“Workers will no longer just be seen as labourers. They’ll be valued as tradespeople in their own right.”

He sees this as an important step in heightening public awareness of the interesting, varied and often highly technical work people in the water industry do. He says it will help attract high calibre candidates to the industry; those who ordinarily may gravitate towards university or more visible trades such as plumbing.

By formerly recognising workers’ skills, Nick expects wages to rise too, something which would further encourage new talent into the industry.

All of this will increase costs for employers. Currently there are generous government subsidies for employers who invest in work-based learning, including Apprenticeship Boost and the Targeted Training and Apprenticeship Fund. However, both are set to end by the close of 2022 (4 August for the former and 31 December for the latter) and there are no indications yet as to whether support will continue into next year.

However, Nick says the benefits of building more structured professionalism into the industry far outweigh the costs for water operators. He says it will help build a supply of workers who are both competent now, and who are committed to continued learning into the future.

Wellington Water will also be likely requiring their contractors to demonstrate a commitment to training as part of the requirements of the Water Services Act. Nick says companies that can show their people are qualified, and not just “supervised”, should have a competitive edge when tendering for contracts.

Moves towards more formal skills pathways are happening in other infrastructure sectors too. David Connell, of Connell Contractors, was instrumental in establishing Civil Trades Certification (CTC) in 2015, when he was Chair of Civil Contractors New Zealand (CCNZ). CTC, delivered by CCNZ and supported by Connexis, is a nationally recognised accreditation programme for the civil construction industry.

While the people who build houses must prove they are both qualified and competent, David explains, there is no such requirement for those building tunnels or bridges. And yet the consequences of poor workmanship on civil construction projects can be far more dire, he says.

“It’s the difference between a bit of gib falling off someone’s wall and an entire bridge collapsing.

“You can’t build A grade infrastructure with B grade people.”

He says the more qualified and experienced the crew, the more productive and safer they will be, bringing down project costs and requiring fewer reworks.

Like Nick in the water industry, David says recognising the qualifications and experience of civil contractors is as much about the “professionalisation” of the industry as it is about improving project outcomes.

“The industry is crying out for people with strong English and maths skills. We want to lift our profile and gain our share of the smart young people coming out of schools.”

There are around 600 civil trade’s qualified people in the country right now and both CCNZ and Connexis are renewing their focus on CTC in 2022 to lift that figure and work with councils to make it a requirement on worksites.

Investing in the domestic workforce

“A push from the top” would also help, according to David, who would like to see government and local councils make certification a requirement for tender submissions. He says the onus should be on contractors to demonstrate their commitment to training to stop the practice of recruiting already trained up staff to satisfy tender requirements.

Recently retired CCNZ chief executive Peter Silcock echoes this sentiment. Speaking to Contractor Magazine, Peter said: “I would like to see it [CTC] becoming a prerequisite, with clients stipulating at the very least that on-site supervisors must be qualified.

“To lessen our dependency on bringing labour and skills from overseas, it’s about ensuring we have the trained, skilled and qualified people here, along with the right equipment and availability of resources.”

This would be no small thing for an industry that is in such demand right now. There are nearly fifty major projects registered on the Te Waihanga New Zealand Infrastructure Commission Pipeline in the transport sector along, five of which are $1 billion+ programmes including Transmission Gully and the City Rail Link.

Connexis is excited by the opportunities open to our industries. With continued population growth, climate change and technological advances, we expect demand to persist into the future. In supporting our industries to maximise the impact of the boom, we are focused on plugging skills gaps by both attracting new talent into our sectors and encouraging employers to upskill their workers.

In February we launched five new micro-credentials targeted at Gateway students, who do work experience with infrastructure companies as part of NCEA. The micro-credentials aim to make Gateway more attractive, giving students a head-start at an apprenticeship by earning them their first credits towards a nationally recognised qualification while bridging the gap between school and work.

Connexis also worked alongside industry partners to kickstart a Workforce Development Strategy for the three waters industry to address persistent skills shortages. We have handed this work over to Waihanga Ara Rau, the Construction and Infrastructure Workforce Development Council, and the final report is due for release in early 2022.

A similar project, for the energy industry, culminated in Re-Energise – Ngā Mahi A Māui, a workforce development strategy, launched on 8 February. The report reveals Māori, women and Gen-Z are the key to a clean energy future and significant mahi needs to be done to support recruitment and retention. It calls for the industry to unite and pursue change, saying collaboration is the key to sustainable recruitment.

As Connexis supports the setup of the new vocational education sector, coming out of the government’s Reform of Vocational Education, we see the need for increased support and training for our industries’ supervisors. With work-based learning set to increase, the need to provide support to those supervisors that are tasked with not only managing their crew but ensuring they are trained to industry best practice. This will be instrumental in building a consistent level of highly skilled and competent workers to ensure quality infrastructure for our future communities.

By working together to show a greater commitment to skills pathways, our industries will be safer, more productive and more attractive to school leavers. We can build the talent pipeline and bridge the divide that is the skills gap currently holding our industries back.

Find out more about Re-Energise – Ngā Mahi A Māui at: https://www.connexis.org.nz/news/new-industry-backed-research-report-to-re-energise-electricity-supply-workforce/. You can view the report at: https://www.reenergise.nz/.