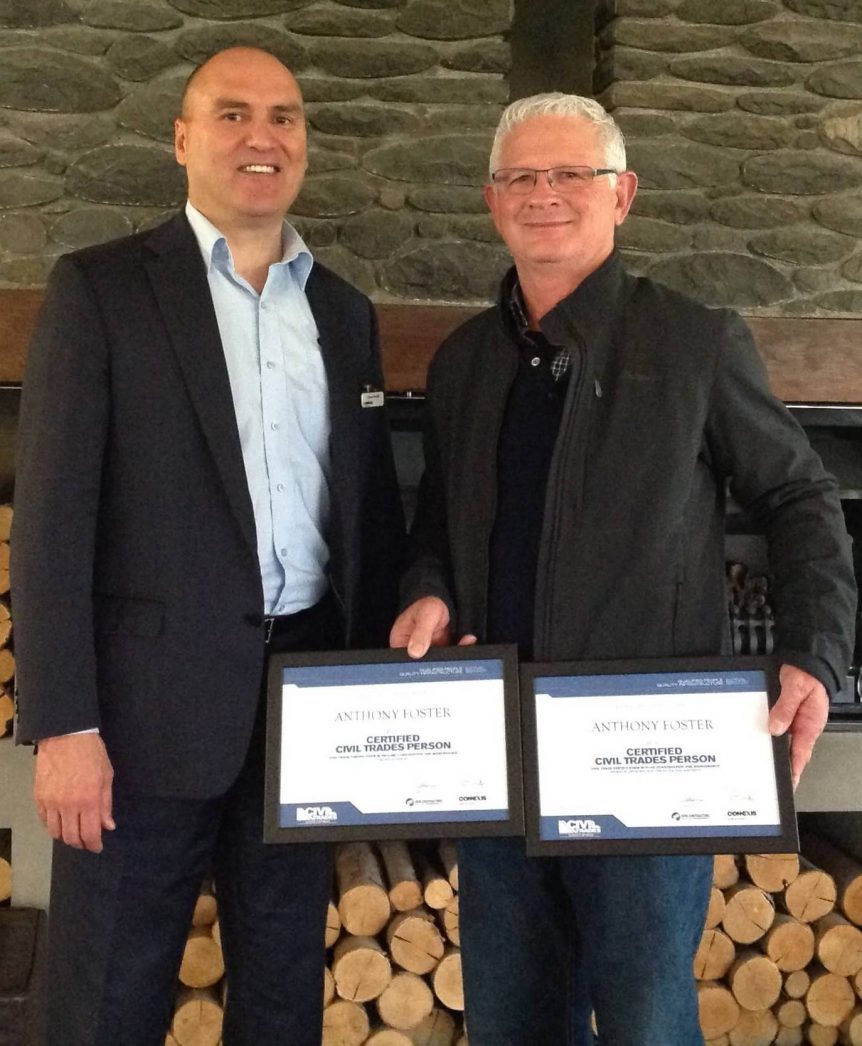 Tony says that it is rewarding to see his considerable years of ‘on the job experience and knowledge’ translating into a recognised trade.  “It’s an awesome move by the industry and helps establish a worthwhile career path, especially for the younger staff.”

“They can take their Trade Certification with them to another job, or even transfer their qualification to a new employer if they move while they are part way through it.  It really gives them a purpose to stick with the industry,” he adds.

Tony’s manager Donal Hanrahan, who is a Senior Project Manager at Fletcher Construction, adds, “Civil Trades gives the individual a qualification to work towards and a clear pathway for development. A recognised skills assessment benefits the whole industry and will help attract young people interested in a career in civil works.”

Civil Trades provides formal recognition for people working at tradesperson level that are both qualified and highly skilled in constructing and maintaining civil infrastructure.  Previously – unlike building, plumbing and electrical workers – workers in civil infrastructure, in jobs such as road construction and pipe installation, had no formal transferrable trade certification.

Civil Infrastructure is one of the largest industries in the country encompassing 600 businesses and 40,000 employees nationwide, with a $20 billion annual turnover – and there is an acute shortage of competent qualified tradespeople. Civil Trades will help to address this shortage by raising skills levels within the industry as well as attracting new people to careers in Infrastructure. It is being hailed as a huge step forward by employers.

To become Civil Trades Certified, workers must complete a recognised Civil Infrastructure Trades Qualification, together with 8,000 hours of on job experience (including 2,000 hours at Level 4 competency).  Certification can be achieved through either a New Zealand Apprenticeship, a regular industry sector qualification, or Recognition of Current Competence (RCC) depending on the individual’s level of experience.

Connexis ITO chief executive Helmut Modlik says the introduction of Civil Trades is a significant milestone for the industry.

“It’s very exciting. We will see a steady roll out of Certified Civil Tradespeople over the coming years with transferrable skills, which is of course beneficial to both workers and employees.  Qualified, competent people produce quality infrastructure.

“Civil Trades will also help to attract workers to the industry now that there’s a clear career path.  Introducing a trade regime for Civil Infrastructure has been something that has been wanted by the industry for a long time and it’s a significant step for both the industry and its workers,” he says.

In 2015 there were 47,500 people employed in the civil sector with a job growth rate of 6.2% between 2014 and 2015, while the total economy growth was 2.4% over that same period.  The industry is continuing to grow and it is estimated that they will need approximately 19,600 new people by 2020 to meet workforce requirements.

Late last year 14 Civil Infrastructure workers involved in the pilot scheme were the first New Zealanders to become Civil Trades Certified. The group marked a new era for the industry leading the pathway for many others.