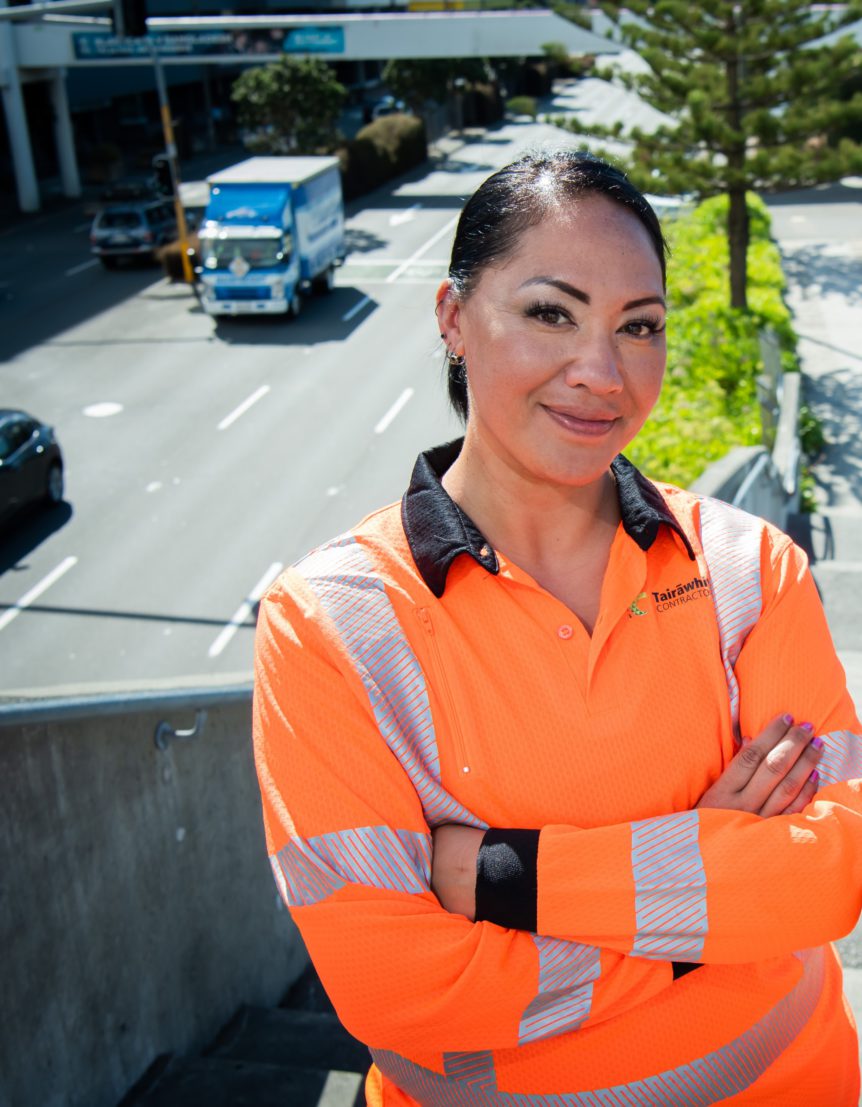 The highlight of Katareina Kaiwai’s four-year journey to achieve her Civil Infrastructure Apprenticeship was getting it finished.

That is not to say that Kat, who now runs her own roading firm, Tairāwhiti Contractors, did not enjoy her training. In fact, one of the first things she did after completing her Apprenticeship was to ask her Connexis Customer Service Account Manager (CSAM) what qualification she could do next.

However, she says it was only once she got to the end of her training that she gained the perspective to appreciate what she had achieved and to see “how cool it was”.

“It has made me push to achieve what I want and [given me] a real sense of accomplishment. My family is very proud of what I have achieved.”

Kat’s trainee journey was never straightforward. Challenges mounted on challenges. Yet this determined young Maori woman always kept her eye on the opportunities her training would open her up to. She is a true believer in the benefit of a skilled up workforce and has become a champion of industry training in Ruatoria and neighbouring communities, a remote rural region of Gisborne.

Kat started out as a self-proclaimed “pen pusher” in her hometown of Wellington. Family eventually brought her to Gisborne where she got her first taste of Civil Infrastructure, working in the Fulton Hogan offices. After three years, Kat’s natural curiosity and thirst for learning led to her increasing dissatisfaction with her desk job. She had become interested in what was happening in the field and decided to see for herself, starting at what others perceived as the bottom as a traffic controller – to later appreciate that that was one of the most important jobs.

From that moment, Kat began work-based training, something she sees as a lifelong commitment. She earned her tickets to work on much of the heavy gear used in road maintenance and within four years was embarking on her Civil Apprenticeship with Connexis. Unable to decide between the optional strands of her qualification, and unwilling to narrow down her career options, Kat chose to do all four.

Kat says this was a new level of on-job learning. It was not easy for her, fitting training in between work and family life. “You just need to make time,” Kat says. There were many late nights and weekends, and some extensions to deadlines, she admits.

Kat credits her success to her CSAM Grant Radovanovich.

“His support was the biggest thing. He’d put the pressure on, saying “tick tock tick tock”. That’s what I needed.”

Time was not the only challenge Kat faced during the years of her Apprenticeship. She was already juggling training with the demands of caring for her young daughter and working away a lot when she fell pregnant again.

In addition to this, she was changing employers. Kat was having to push to get the opportunities she needed to tick off credits. At times she had to take contract work, just to get her training finished.

Undaunted by the difficulties and spotting a gap in the market and a chance to find a permanent solution to her job woes, Kat moved back up the Coast two hours north of Gisborne, to Ruatoria, and launched her own business. She gained her Apprenticeship in December 2020 and was by then already managing a 20-strong workforce and taking her employees with her on the road to lifelong learning.

Tairāwhiti Contractors is made up of staff who are local to the East Coast. When starting the firm, Kat was committed to recruiting “fresh blood” to help plug the gap in skilled workers which has long been an issue for Civil Infrastructure, especially in rural regions like hers.

Her workforce is diverse. Nearly a quarter are women, and while they are mainly young people just starting out on their career path, she has some older workers too, who have switched from other industries.

Kat’s hope is that, once trained up, her employees will stay in the region and help build local capabilities beyond forestry and farming. The aim is to provide local solutions to local problems, and to help curb under-investment in the region by putting Civil Infrastructure in the East Coast on the map.

There are around 200km of state highway in this northeastern corner of the North Island, with many more kilometres of smaller off-roads. Subsidence is also a big issue in this coastal region. Yet according to Kat, roading decisions are often made by companies two hours away in Gisborne, who do not necessarily understand the region’s unique challenges. Priorities can be misaligned; or work deferred because there is not enough accommodation to house crews coming in from other areas.

With help from the Provincial Development Unit (PDU), Kat has been expanding the competencies of her business, training her workers up from the basics of traffic management, to maintenance, and hopes eventually to move them into road contracting. She even labour-hires her staff on occasion to give them exposure to a wider range of projects and skills.

The next step for Kat is to earn a qualification in work-based training herself.

Kat might be finished with her Apprenticeship, but her career in Civil Infrastructure is still very much in progress. While she admits she has “no life” outside of the demands of her business and family, it is clear Kat would not have it any other way.