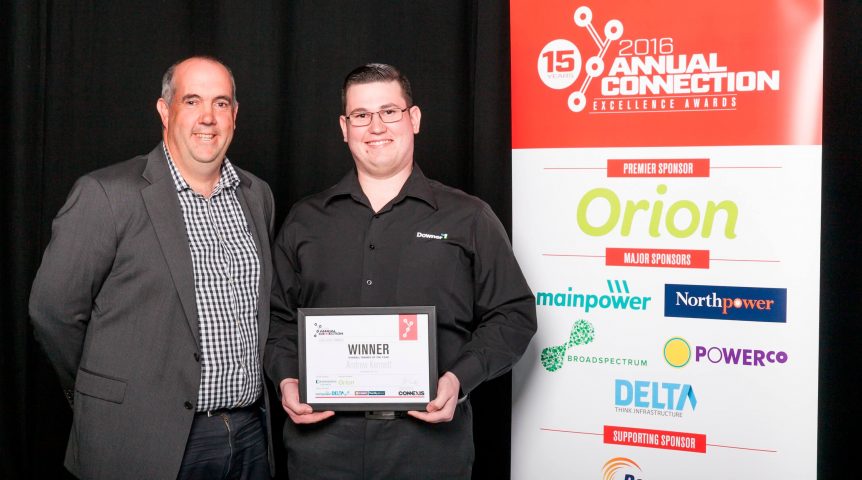 Telco apprentice Andrew Kennett has been crowned Trainee of the Year at the Annual Connection Excellence Awards 2016.

Andrew’s manager Bill Pollock adds, “Andrew is an exceptional young man and his roles and responsibilities within Downer go way beyond that of a normal apprentice. He shows maturity way beyond his years and is held in the highest esteem by colleagues and customers. Andrew has redefined excellence. He is an outstanding role model to others, and is the benchmark for future apprentices to aspire to.”

“It has been a real pleasure to watch Andrew grow and develop during his time with Downer. It was clear very early on that he was a future Trainee of the Year in the making. I am delighted that his achievements have been recognised at the Annual Connection Excellence Awards. I can’t think of a more deserving winner, and I couldn’t be prouder if Andrew was my own son. He has an extremely bright future ahead of him, and I’m excited to see what he will go on to achieve.”

The Excellence Awards dinner on Thursday night marked the culmination of the Annual Connection event, an iconic Industry event for everyone involved in the Energy Industry that is now in its 15th year. It featured a series of skill events over three days and this year was held from October 18 – 20 in Christchurch.

The event initially began as the “Liney Comps” and has developed over the past 14 years to the event it is now. It is an industry event, run by a volunteer committee and managed by Connexis.

The Trainee Excellence Awards celebrate the best and brightest trainees working in the Energy and Telecommunications industries and those who have made a significant contribution to the industry through their enthusiasm and commitment to Industry training.

As well as the excellence awards presentations, the runners-up and over-all winners of the line mechanic and cable jointer competitions were also announced, along with the recipients of the Ross Archer Memorial Line Mechanic Safety Award and Outstanding Leader Award.

The judges awarded Andrew Trainee of the Year with a unanimous decision, commenting that he is very deserving of the Overall Trainee of the Year Award. They said that he is ‘One of a Kind’ and an exceptional leader for someone so young and demonstrates and embraces his company values of excellence, collaboration, courage and integrity. They said that Andrew is an outstanding trainee with an exceptional future in the Industry ahead of him.