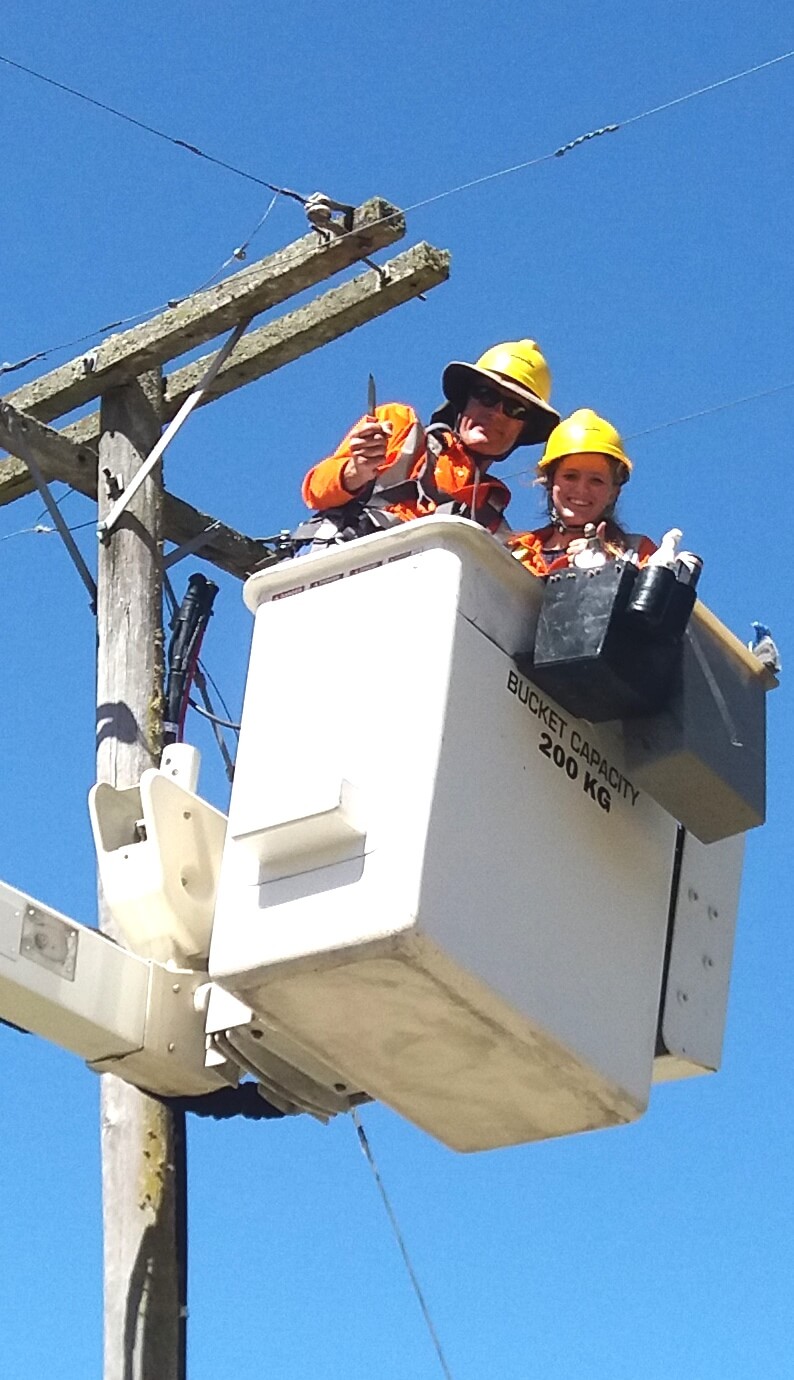 17-year-old Ellie Pugh is carving herself a successful career in the Energy Industry, a traditionally male dominated domain, in the true spirit of International Women’s Day today (Wednesday 8 March 2017).

Ellie is the only woman in MainPower Rangiora’s field services department and according to Rob Wilson, MainPower Operations Manager, she’s a great ambassador for young women wanting a career in the industry.

“The reaction from our field staff towards Ellie has been very positive. She’s been the perfect addition to the team since she started in September last year. She does her job really well, and fits in.”

Rob explains that having Ellie on the team in the male dominated workplace is positive.  “Many staff had preconceptions about women not being strong enough to do the job, but Ellie has opened their eyes and she’s changing ingrained views and preconceptions.”

Rob adds that diversity in the workplace means much more than just gender and ethnicity.  “Globally it has become linked to innovation and diversity of experience and thought. We’ve certainly noticed and appreciated a different balance since Ellie joined the team.”

Ellie is out in the field working for MainPower and says that every day is different, which she loves.  “Sometimes we get called away to a fault, and are then often called away again to a higher priority fault. Prioritisation is a big part of this job. Another day might just be working on service boxes in a subdivision.”

Ellie continues, “I’ve been spending time with different teams, depending on what skills I’m learning.  At the moment I’m with the ‘underground’ team, although sometimes I go out with the cable jointers. Over the next few months I’ll start to go out with the lineys.”

Ellie’s immediate goal is to complete a 2.5 year apprenticeship, which she is 5 months into, and her Level 2 New Zealand Certificate in Electricity Supply (Introductory).

And her advice to women considering the Energy Industry as a career:  “Be realistic. It’s a great industry to work in, but it’s not glamorous. You have to be prepared to pick up a shovel and work in the rain. You need to have a good sense of humour and a thick skin.”

Women are currently underrepresented in the Infrastructure Industry. While they account for 50 percent of the New Zealand population, they make up less than 4 percent of Connexis trade and technical trainees.

Through their Ultimit – Women in Infrastructure project, Connexis has been championing the increase of women into the industry since 2010. One of Ultimit’s key initiatives is ‘Girls with Hi-vis®’, held in June, which sees women throughout the country try their hand at work for the day at various Energy, Telecommunications, 3Waters and Civil Infrastructure companies. Last year’s event saw more than 50 women rolling up their sleeves and ‘giving Infrastructure a go’.

MainPower participated in Girls with Hi-Vis® for the first time last year, and hope to be involved again in June 2017.  They are planning to invite Ellie along to talk to attendees, as well as some male staff to talk about females working in the industry from their perspective.

Attracting more people to the Infrastructure Industry as a whole – and not only women – is key to address a rapidly growing sector.  In 2016, the NZ Government released its 30 Year Infrastructure Plan, which outlined a $110 billion investment in Infrastructure. This represents a huge amount of activity with the demand for competent, qualified people at an all-time high.  It is forecast that a further 49,000 people will be required for the infrastructure workforce by 2025.

For more information on International Women’s Day
Go to: https://www.internationalwomensday.com/