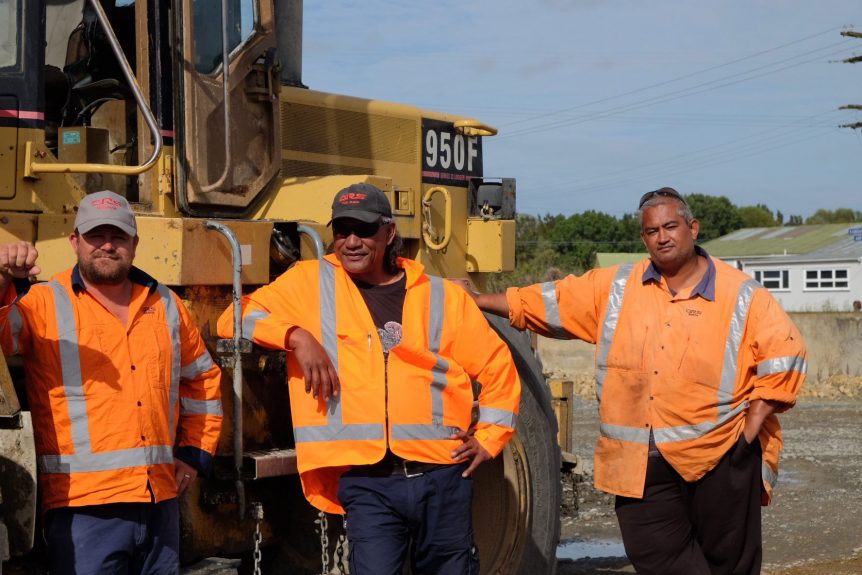 Pictured: QRS staff Mike Wilson, Stacey Pompey and Lee Pomana received Civil Trade Certification last week through Industry Training Organisation Connexis. The three men have over 8000 hours each of practical experience in a range of specialities from road and pipeline construction and maintenance, to road surfacing.

Civil Trades Certification is a nationally recognised accreditation programme for civil contractors that blends a trade apprenticeship with thousands of hours of practical experience.

The apprenticeship and Civil Trades Certification is fairly new.

While apprenticeship programmes for electricians, carpenters, and plumbers have been around for years, until December 2015, there was no similar pathway for a career in civil infrastructure. It means highly skilled operators have for years gone unrecognised.

In response, Connexis developed a programme in partnership with the industry specifically for experienced staff already working in civil infrastructure.

The programme allows skilled operators to achieve the apprenticeship qualifications that lead to certification by recognising current competency from years already served on the job.

Connexis chief executive Peter Benfell, says the recognition of current competence process requires the employee to have been working in the industry for five years.

“To then apply for Civil Trades Certification they also need to show two years (or around 2000 hours) working at a higher level, most likely in a supervisory role. Letters of recommendation from people in the industry are also required”.

So far, 130 people in New Zealand have earned Civil Trades Certification, with over 700 currently signed into qualifications toward certification.

“To have three qualify from one company in a small town such as Wairoa is a credit to QRS,” adds Mr Benfell.

QRS chief executive Nigel Pollock says Stacey, Lee and Mike each have 8,000 hours of practical experience in a range of specialities from road and pipeline construction and maintenance, to road surfacing.

“There’s been nothing prior to this that can get the civil construction trade recognised through a qualification. Now, thanks to Connexis, this gives these guys an industry career, not just a company job. Rather than being an invisible workforce they are recognisably respected tradespeople and we hope the pathway they’ve taken is an inspiration to others.”

QRS’ Mike Wilson agrees. “Being civil trade certified means I’ve been recognised for what I’ve done in the past, and it provides a pathway for me for further learning and higher qualifications”.

“It also means when we’re tendering for work at QRS we’ve got qualifications that will help enhance our attributes, and mean we can win bigger and better tenders.”

Stacey Pompey has been at QRS for 22 years. “To have come this far and become civil trades certified means a lot. It shows I have these skills, that I can pass them down to others, help them out, and open the doorway for other qualifications.”

Lee Pomana says becoming civil trades certified was a huge achievement. “It builds in me a sense of self-worth as well as giving me a chance to step forward and achieve a lot more than I ever thought possible.”