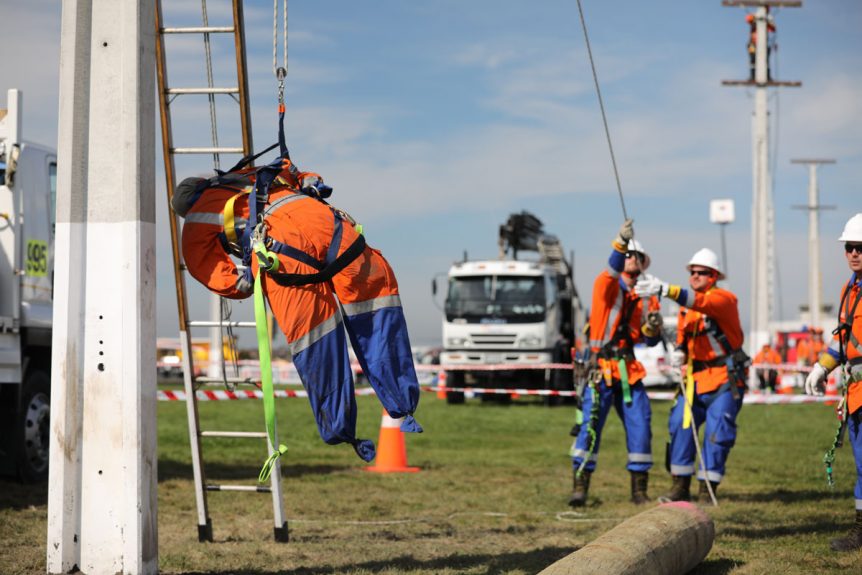 Competition is hotting up between electricity supply teams from around New Zealand at Annual Connection 2018 in Christchurch.

The annual competition sees linesmen and cable joiners competing in an intense series of events over three days outdoors in a field adjacent to the Air Force Museum in Wigram.

This year nine teams are competing in the line mechanic competitions, with events including a pole top rescue, team building and first aid competitions. Ten individuals are competing in the cable jointer competitions. The event is open to the public and is also a driver to attract more people to the electricity supply industry, which is short of skilled workers nationwide. It’s predicted that about 9,000 more staff will be required over the next five years.

Annual Connection is organised by Infrastructure Industry Training Organisation (ITO) Connexis. Group Manager Customer Engagement Kaarin Gaukrodger says, “The event is a valuable industry event and demonstrates the skills and expertise of these workers who keep New Zealand’s power supply up and running.

“People take it for granted that their lights will work and that they have power to heat their home and cook meals but sometimes due to storms, snow, floods or even car accidents taking out power poles the power is temporarily cut off.

“This is where these power crews swing into full action, keeping New Zealand on the grid and up and operating.”

Powernet Invercargill’s Sam Maurangi is in her second year competing at Annual Connection and loving it. She’s a recently qualified line mechanic and says she loves the diversity and challenge of her job.

“My work day is diverse, every day is different, it’s great.”

And Sam’s advice to any women considering joining the industry – “Just do it, don’t doubt yourself give it a go!”