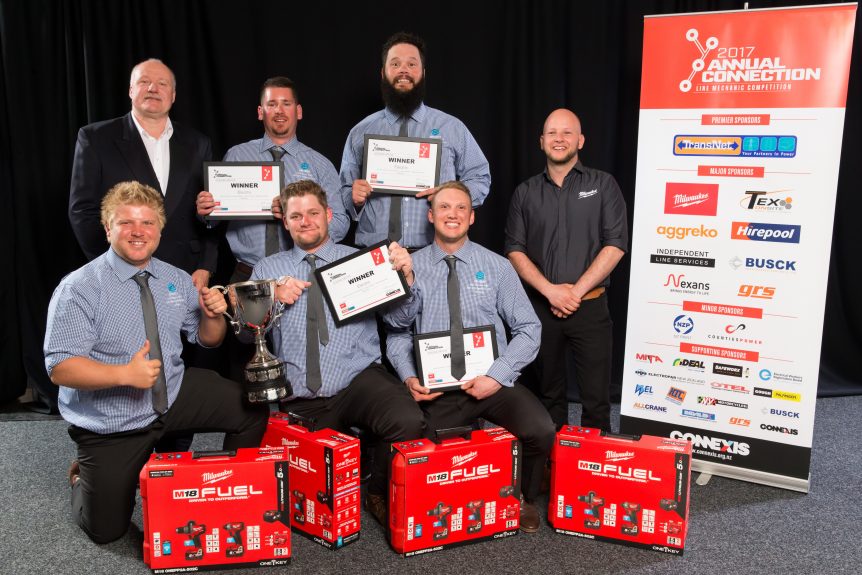 The top trainees and trainers in New Zealand’s electricity and telecommunications industry have been recognised at the Connexis Annual Connection Excellence Awards in Hamilton last night.

The awards evening was the final event in the annual weeklong showcase of the best and brightest within New Zealand’s electricity supply industry. The seven winners were chosen from 13 finalists in several categories representing the electricity and telecommunications industry around the country.

Chief Executive Peter Benfell for Connexis, the Industry Training Organisation for the electricity supply and telecommunications industry which hosts the event, says the awards celebrate the achievements of the best talent in the industry that keeps New Zealand powered and connected.

“The trainees recognised are rising stars and will be the future leaders in our industry. They’ve all shown great commitment to their chosen career path having a great attitude to work and education as they progress through their industry qualifications and it’s fantastic to be able to reward them for that.

“The same goes for the top trainers. These are the men and women who are investing their time in growing the next generation and ensuring this vital industry is well served with skilled staff as it continues to grow and develop with new technologies and challenges,” he says.

“Not only are the awards a chance to reward those who have worked so hard, but also provide inspiration to others in the industry to push for their goals.”

Peter adds that nominating trainees for the awards is a great way for employers to demonstrate their company’s commitment to training.

Connexis is the Industry Training Organisation (ITO) for the infrastructure industry.