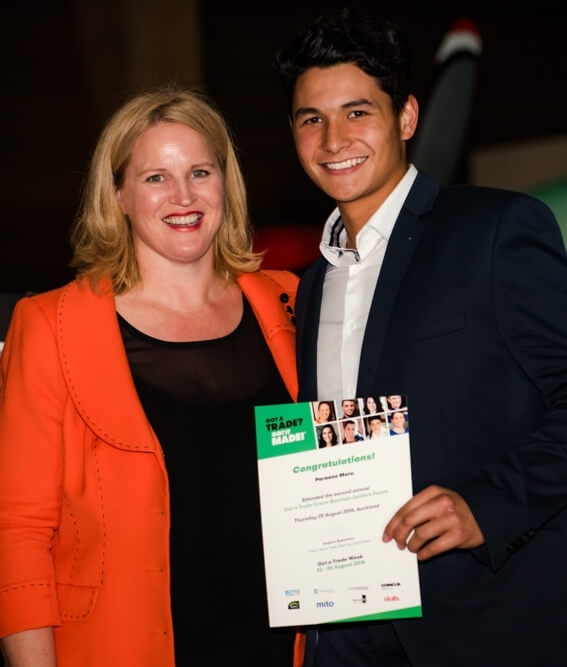 Ten of Connexis’ most promising trainees were excited to be chosen to take part in a recent knowledge-sharing forum.

Seeing this as a great opportunity to extend their skills and knowledge, and further their career prospects, the group spent the day listening, learning and being inspired as part of the annual ‘Got a Trade? Got it Made!’ week.

The Got a Trade campaign is in response to the growing need for more young people to join trades and services roles across New Zealand and aims to inspire people to join the workforce. Industries like aged care require more than 2,600 new people entering the sector year on year and in construction and infrastructure that figure is closer to 5,000.

Looking forward to 2020, in industries like mechanical and automotive engineering, there’s demand for more than 5,600 and 11,200 new people respectively. By 2020 the civil engineering sector will also need 19,600 new people, and in the manufacturing sector, that figure blows out to 40,000.

Speaking about the Forum Downer Tauranga’s Joshua Waterson-Speak says, “It was great to be nominated and a real surprise.  It made me feel good just knowing that my name had been put forward.

“The speakers were really good.  I enjoyed hearing about their experiences especially the examples of some of the volunteer work they were doing in the community and overseas.  For example the people who were using their trade skills to help others not just to help themselves.”

Joshua adds that the forum really inspired him for his future career aspirations.  “Hearing and meeting people who have made a success of their lives has made me want to push myself a bit further too.  It’s given me even more drive to achieve my goal which is to move from a Foreman role to a Supervisor role,  I’m aiming to become a Pavement and Drainage Supervisor.  I want to become a good leader and role model for the guys I’m working with.”

Horizon Energy Whakatane trainee Paraone Muru says it was a real honour to be nominated and that he appreciates the support from Horizon Energy.  “The forum was great, lots of excellent speakers, inspiring and it really opened my mind.  It made me think about my goals in life and what’s the best strategy to achieve them.”

Paraone adds that attending the forum has given him a good starting point and direction, especially this early into his apprenticeship.  “It was really motivating and inspired me for my future.”

The Future Business Leaders awards dinner at Auckland’s Museum of Transport and Technology was one of the highlights of Got a Trade week.  Before the award winners were announced each of the 80 nominated trainees were presented certificates by Associate Minister for Tertiary Education, Skills and Employment Louise Upston, who is a keen supporter of the iniative.

“There is a huge demand for skilled people across all of our industry sectors – Civil Construction, Water, Energy and Telecommunications. In 2015 there were 47,500 people employed in the civil sector alone, with a job growth rate of 6.2% between 2014 and 2015, while the total economy growth was 2.4% over that same period.  The Civil Industry is continuing to grow and it is estimated that they will need approximately 19,600 new people by 2020 to meet workforce requirements.

“Connexis is proud to be a driving factor in the campaign, a key element of which is the on the job training which allows trainees to not only work and be paid, but to learn as they go and achieve a credible qualification that will be invaluable in their career moving forward.”

About Got a Trade
The Got a Trade? Got it Made! campaign is a joint consortium of forward-thinking industry training organisations – Connexis, BCITO, Competenz, HITO, MITO, ServiceIQ and The Skills Organisation.  Collectively they represent more than 120,000 learners and 10,000 employers across 100 industry sectors.