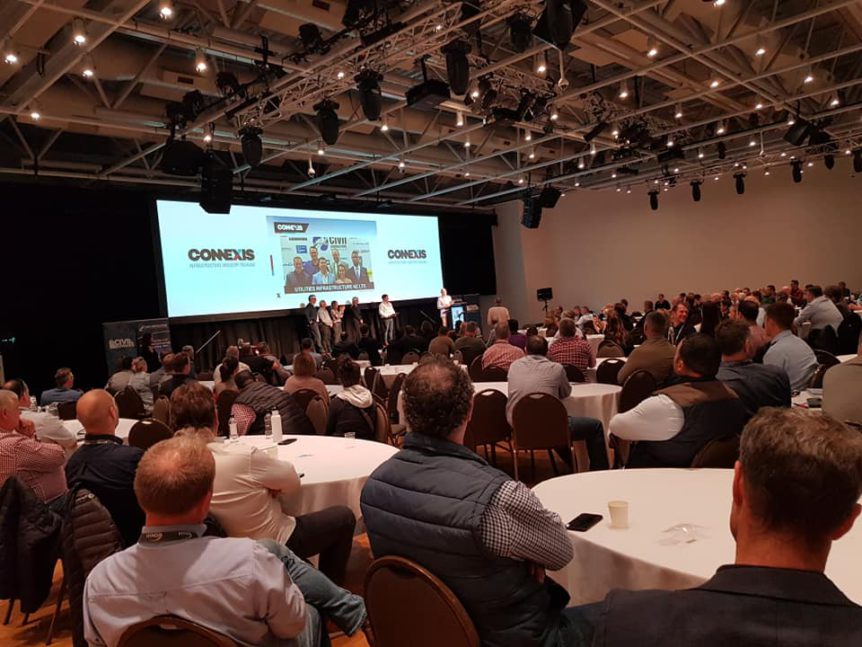 Hayley Scott of McConnell Dowell won the coveted Z Energy Emerging Leader Award, which recognises well-rounded people under the age of 30 who are excelling in their career.

Ms Scott demonstrated her leadership abilities after being stranded in American Samoa during the COVID-19 lockdown. Without any senior management present, she ensured her team were safe, informed, and on track while working on the runway apron at Pago Pago International Airport.

The award judges commended Ms Scott’s efforts, commenting that her ability to manage the challenging situation she found herself in was a testament to her natural leadership abilities.

“She courageously completed the project while isolated in a foreign country with a different culture, with most of her colleagues stuck back in New Zealand. She showed maturity beyond her years and is a deserved winner of the Emerging Leader Award.”

Drew Hartley of Isaac Construction won the Z Energy Personal Improvement Award, which recognises outstanding commitment to professional development both personally and for others.

Mr Hartley has been with Isaac Construction since 2014, overcoming many challenges to get where he is today as a registered drainlayer with an NZ Certificate in Business. He is held up as a benchmark for performance in his company, displaying an exemplary attitude and work ethic.

“He has an unmatched desire to succeed and better himself, but more importantly, to inspire those around him. It’s a pleasure to see Drew’s progression and we wish him all the best for the future”.

The overall winners walk away with a unique artist-designed trophy, one year’s subscription to Contractor Magazine, a voucher from Z Energy, and $1,000 cash. Emerging Leader Award recipient Ms Scott received the ‘Dr Dave Memorial Trophy’ – presented for the first time this year in memory of Dr Dave Hutchison, who served as Chief Engineer at Downer for many years and was renowned for his work developing young leaders.

Each category also gave a Highly Commended Award, which went to Jay Dangwal of Fulton Hogan and Fiona Jerry of Pipeline & Civil respectively.

Also celebrated on Friday were the Connexis Civil Industry Training Awards, recognising employers that provide opportunities for their staff to gain skills and knowledge through a nationally recognised qualification.

Utilities Infrastructure NZ received the prize for companies of up to $10 million turnover. The judges commented that the business was dynamic, progressive, and led by passionate owners who embrace training at all levels.

Pipeline & Civilreceived the prize for companies with a turnover between $10 million and $100 million. The business was recognised for cultivating strong individual relationships between owners, management and staff by investing in comprehensive and structured training.

Downer NZ received the prize for companies of over $100m turnover and alliance projects. The head office team was honoured for increasing training numbers by over 40 per cent in the past two years.

The winners walked away with industry recognition, a certificate, a trophy and free enrolment for any Connexis qualification.

Civil Contractors New Zealand Chief Executive Peter Silcock said all the award recipients had shown outstanding professionalism and dedication to their work and their colleagues.

“These awards highlight what’s truly possible when we put passion, commitment and determination into our work. The finalists have all shown great promise for their careers and respective organisations. Congratulations to each and every one of them, and I hope they serve as inspiration for us all to strive for our best in every situation”.

Z Energy Customer Manager for SME and Partner Relationships Amber Scott-Harvey agreed, saying the awards showcased some of the amazing talent coming through the ranks.

“It’s great to see younger generations striving for success, as well as companies big and small supporting their staff to gain the skills and knowledge needed to excel in this industry.”

“We are delighted to honour all the companies nominated – they have gone that extra mile to invest in their people, ensuring that both the individual and our industry as a whole have thriving futures.”

The Z Energy Emerging Leader Award is given to people under the age of 30 who have innovated, impressed and made a difference to the industry, their peers and their employer. These people have excelled in their career and demonstrate a well-rounded character with exceptional leadership qualities.

Hayley Scott joined McConnell Dowell in December 2018 on the completion of her Bachelor of Civil Engineering (Hons). Almost immediately she began working in American Samoa on the Pago Pago International Airport Runway Apron project, which is where she was when Covid-19 interrupted our world. Caught on the island due to travel bans, while several of her team were stuck back in New Zealand, Ms Scott stepped up and made sure the team were safe, informed and on track.

Jay Dangwal came to Fulton Hogan’s attention as a participant in the highly competitive Project New Grad programme, having secured one of three places from over 200 applicants. Throughout the three-year rotation within Auckland Transport, GHD and Fulton Hogan, Mr Dangwal displayed outstanding leadership qualities and a positive team mentality. Fulton Hogan was delighted that he decided to stay once the program was completed.

The Z Energy Personal Improvement Award recognises how an individual has committed themselves to ongoing training and development for the betterment of themselves and their employers. It reflects how they make the most of the opportunities made available to them in the civil and general contracting industries.

Drew Hartley has been employed with Isaac Construction since April 2014. A registered drainlayer with a NZ Certificate in Business, Mr Hartley intends to add to his current qualifications by completing his water installers qualification. From there, he plans to undertake supervisor and further leadership training, while continuing to accumulate experience in his current foreman’s role. His long-term goal is to progress into a being a three-waters supervisor.

Fiona Jerry has worked with Pipeline & Civil Ltd for 15 years. Her main goal is to continue her journey of learning so that she can be the best she can be and inspire, nurture, mentor and teach others along the way. She is specifically interested in learning more about the design aspect of traffic management and hopes to complete the Waka Kotahi NZ Transport Agency design course. Ms Jerry would also like to assist with upskilling staff from labour hire companies regarding the new TTM regulations.

UINZ was established in 2013. Since the start, it has been committed to its people and the training needed to ensure the growth of both the individual and the business. Currently, more than 50 per cent of UINZ staff are in training courses. The company’s goal is to produce a fully qualified three waters trainee every six months.

Pipeline & Civil is a value-based, employee-owned and operated company. People are at the heart of the business and the company is committed to providing opportunities for everyone. Pipeline & Civil strongly believes that upskilling people is key to staying at the forefront of civil construction.

Downer NZ has committed to “grow our own” as the civil infrastructure industry struggles to fill jobs with skilled candidates. Over the past two years, the company’s training numbers have increased by 40 per cent and after establishing a training support network, completions rose by 60 per cent.

The company is dedicated to developing its people and maintaining a high standard of industry skills and knowledge. This is demonstrated with significant investment in a new Technical Training Team and Corporate Social Outcomes Team. Downer NZ’s focus on team culture and inclusion is underpinned by in-house programmes for youth, Māori, Pacifica, women and leadership.