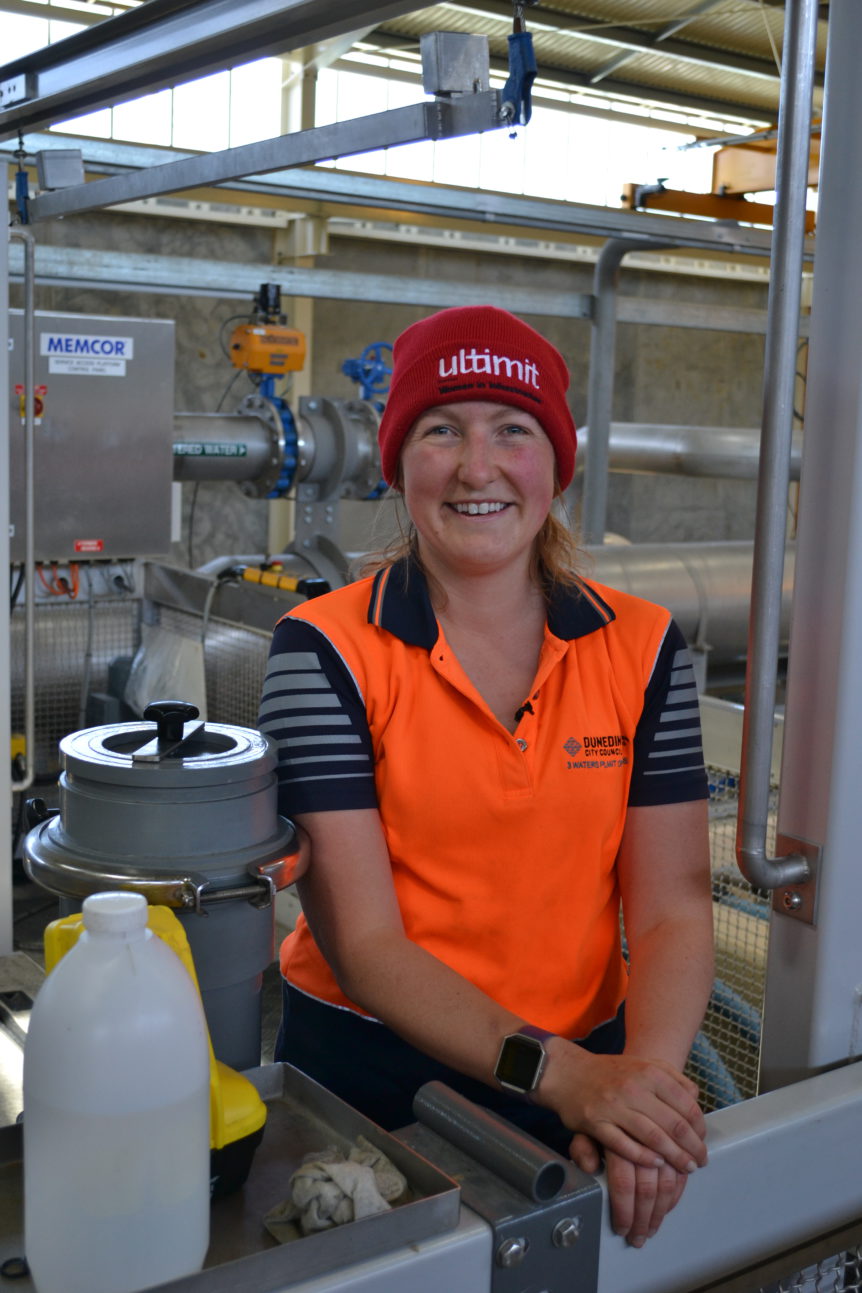 A Bachelor of Science majoring in Pharmacology led to over a year of voluntary lab work and a juggle of part time jobs before Caitlin Robertson found her niche in Water Treatment.

Caitlin, a Water Treatment Technician for Dunedin City Council (DCC), says just because you are smart does not mean university or a life in academia is right for you. As a Connexis Ultimit Ambassador, Caitlin is keen to open women’s eyes to the opportunities outside of the usual career pathways.

One of the biggest pluses of the work she does now, she says, is that it is in high demand. With the on-job training that is offered, she adds, employers are looking for workers who are keen to learn, not just those who already have experience on their CVs.

Caitlin found her lack of work experience straight out of university a major barrier. Years of studying for a degree proved to be no guarantee of a job. The market is full of ultra-qualified people, she says, but work experience is the clincher.

“I always seemed to be one rung under where I needed to be.”

She had to resort to accepting unpaid work experience, filling her spare hours with three part-time paid jobs outside of her field.

The other risk you take when you choose the university path, Caitlin says, is that when you do start working, you may find it is not what you want to do after all.

That is the situation Caitlin found herself in, becoming increasingly disenchanted with the lab-based research she was qualified for.

Lucky for her, early on in her job search she did a month’s volunteering for DCC in the Water Treatment division. This opened her eyes to a new direction her career could take.

“I saw there was so much more out there, beyond academia. It was absolutely fabulous…nothing like anything else I’d ever done previously.”

She said it was the blend of lab work and getting your hands dirty that sold it to her; being able to see the country and do something different every day.

“You weren’t stuck in your four walls.”

While that month of work experience made a deep impression on Caitlin, she clearly made her mark too. A year later, she was given a “heads up” about a job coming up within the division and jumped at the opportunity.

Caitlin has been with DCC for five years now and her enthusiasm for what she does is as strong as ever. The jobs her role entails is too long and varied to list but includes, as she says, “a little bit of everything”; electrical, mechanical, investigation, book work, vehicle and equipment maintenance, project management, building.

“You can’t plan anything. You’re winging it every day, never sure what will turn up.”

She has not left academia behind entirely either, making full use of the opportunities to train up within her job.

Caitlin loves the training component of her job.

“Vocational training makes it so much easier to grasp concepts compared to academic study in a classroom. You’re not learning anything that’s non-essential. What you’re learning about is right between your hands and you’re using it in the moment. You can grasp it with all your senses.”

“I should have been doing this all along.”

It helps that Caitlin’s employer, DCC, sees the value of training and encourages its workers to keep skilling up, especially when its around health and safety. She describes herself as “trained up to the eyeballs” and says this gives her the confidence to do her job well.

Caitlin does not find it hard fitting all this training into her work life. She laughs that doing full-time work and part-time study is much easier, and better paid, than doing the reverse, as she had been doing throughout her university years.

“The evidence gathering and knowledge base is easily gained on-the-job and the theory is often online and easily done at home. And work sometimes provides time off for study.”

Caitlin also finds time to pursue her passions outside of work, heading into the hills with her hiking club or friends, often up to two nights a week. She considers anywhere within three hours drive of Dunedin fair game.

“Nothing stops you from doing what you enjoy.”

Work often helps with these treks into the bush too. Caitlin carries a cup on her belt and can tell just by looking at a river, pond or puddle whether the water is safe to drink.

Her job has also enabled her to pay off her “huge” student loan, racked up during her time at university; paid for overseas travel; and allows her to buy “all the treats”, which for Caitlin means top-of-the-line tramping gear.

Caitlin “highly recommends” the trades as a career choice for anyone wanting to avoid the humdrum of an office, and who wants balance and variety in their job.

To women considering a future in Infrastructure, Caitlin says there is plenty of room for women in the industries of Water, Energy, Civil and Telco. They can bring a stronger work ethic, she says, with better time management. Women also look and think about things differently, Caitlin says, are more open to collaboration and taking on others’ ideas, and can be more willing to try new methods and technics.

She adds that now is a great time to give the trades a go. Free Trades Training (aka TTAF, the Targeted Training and Apprenticeship Fund) makes apprenticeships and most on-job training free and is generating a surge in recruitment and vocational learning in Infrastructure.

Reforms in Caitlin’s industry, Water, are also creating demand for new recruits and giving urgency to a backlog of projects.

Once you are in the door “you’re away and off with unlimited pathways to choose from” says Caitlin.

Where does she see herself ending up? Long term, taking her skills to Antarctica is on her bucket list. Right now however, she is content where she is and has no plans to go anywhere.

“I drive to work happy every day. Who can say that?”