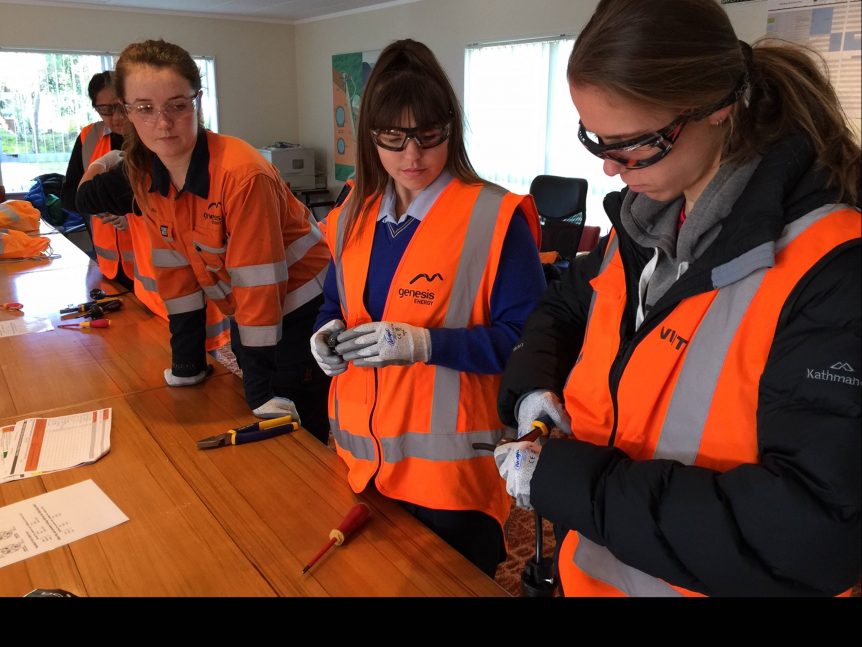 Genesis Energy is currently working hard to put together the company’s 2018 GWHV event at Tokaanu Power Station in the central North Island. It’s the second year the company has participated in the GWHV programme, which aims to provide insight into the career opportunities for young women that lie in infrastructure industries. Opportunities they may not be aware of otherwise.

“The beauty of it is that it makes those opportunities and choices visible to young women. Often they’re not presented with trades as an option when it comes to leaving school and choosing a career, but I think trades offer incredible opportunities.

“I wish I had known more about the trade opportunities available when I was leaving school.”

Instead, Rebecca Larking found her way into the power industry by going to university and studying as a hydrologist. From there she moved into an environmental role and into operational roles.

“While I didn’t come into this industry via a trade, I work with a lot of people who have and I can see the value in it,” she says. “Though things have improved since I left school in terms of making girls aware of the choices they have in this industry, there is still work to be done.”

Rebecca’s own career path from hydrologist to a general manager is a clear example of the job variety that lies within the power industry, and that was what took most attendees at last year’s Genesis GWHV event at Tokaanu by surprise.

“I think most of them were expecting everything to be very engineering focused. While we showed them that choice and presented them with women in those roles, I think the variety of roles which make up our team really surprised them,” she says.

“I think perhaps a lot of the girls last year didn’t really know what they were coming to initially, but by the end of it, as we went through the power station; and they had some hands-on experiences of all different aspects of the inner workings, they really started to engage.”

The success of that event saw Genesis happy to commit to a second event in 2018. It’s grown from nine or ten girls last year to about 42 lined up for this year’s event.

The other unexpected benefit for Genesis of GWHV, says Rebecca, is how engaged and passionate the staff have become about it.  “The staff got a real buzz from it. It’s given us a real leadership opportunity to grow some of our team, into speaking and presenting. A lot of them are really excited about showcasing what we do.”

Rebecca says the wider benefit of being a part of GWHV is to make Genesis a more diverse and representative workplace.