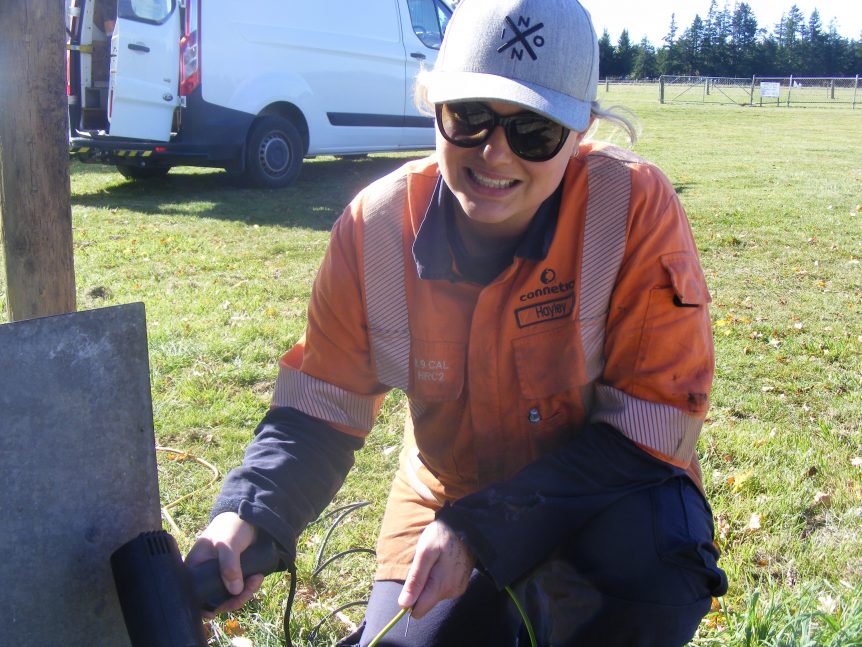 At the age of 29, Hayley Macphail is finally living the dream.

Despite knowing she wanted to be an electrician for most of her adult life, Hayley didn’t really know how to make it a reality – or even if it was a possibility for a young woman, even in modern New Zealand.

“I don’t know if it has changed but when I left school trades were never really presented as an option for girls,” she says. “Most of the emphasis was on going to university, or study of some kind, which doesn’t suit everybody. And if you didn’t do that your choices were really office work or retail.”

But finally, after stints as a legal secretary and a property manager, both of which she decided weren’t the right career for her, and some time living overseas, Hayley finally returned home and decided to bite the bullet, completing her electrical pre-trades.

Now she is working as a trainee electrical fitter with Connetics in Christchurch and loving it.

Her delayed start to the career she loves has left Hayley passionate about making sure other young women know that finding a trade is absolutely an option for them when it comes to choosing a career.

“Events such as Girls with Hi-Vis®, are great in that they are a good starting point for girls to find out more. But it would be good to see even more work done to educate young girls on all of the options available to them.”

Hayley believes there are plenty of employers ready and willing to take on young women, it’s just a matter of finding the right women and ensuring they get the right training.

“Like anything, it’s not going to suit everyone. You have to have an interest in it and be prepared to really get in there. But the point is, how do you know if it suits you if you don’t even know it’s an option?”

Hayley herself found out there were more options open to her, once she had completed her pre-trades and started digging a little deeper.

“I did start doing domestic electrical work, but it wasn’t the greatest for me. Then I started to look around for what the other options were and came across Connetics. I immediately thought it sounds like a great place to work because they were working on things like sub-stations.

“It was all more mechanical and on a bit of a bigger scale.

“Ultimately I just love fixing things and working with my hands, and I’m just happy to be finally doing it,” she says.  “I don’t want others to have to wait as long as I did to do what they want to do in life.”