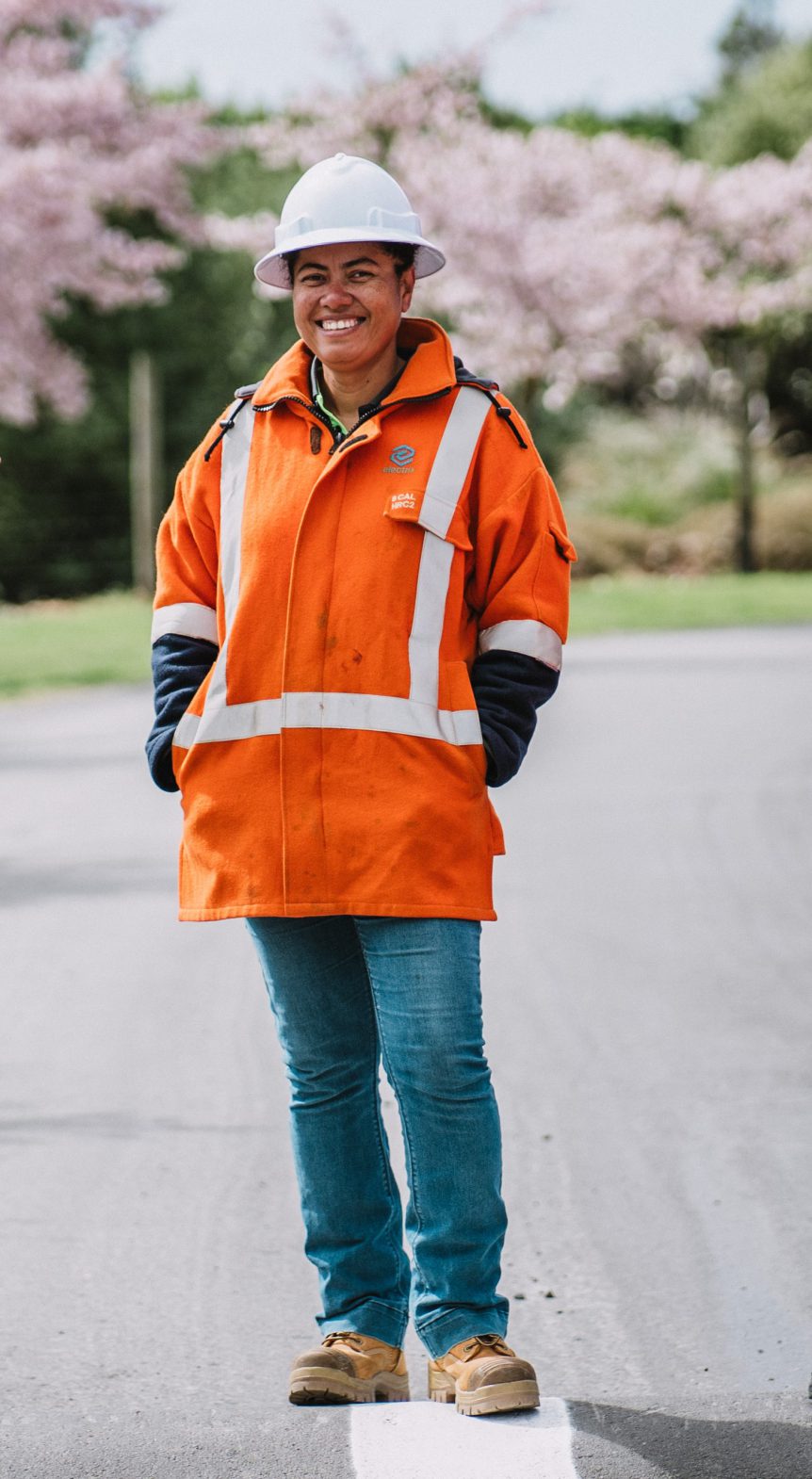 “Give it a go” is the advice to women considering a future in infrastructure from Connexis Ultimit Ambassador Laisa Pickering.

A high-voltage live line mechanic at Electrix, Laisa says many of the barriers that make working in the industry difficult for women are more a perception than a reality. Confidence in your own abilities and skills, and not brute strength, is what it takes to make it, she says.

And Laisa should know. She has worked in infrastructure for the past 21 years and was one of the first women to be recruited under the Women in Power initiative, now known as Ultimit: Women in Infrastructure, which turns 10 this year.

That is not to say she was always the assertive, self-assured woman she is today. She says she was the quiet one in the family. But being one of five girls and one boy, there was never any question of her holding back because of her gender.

Laisa was working with her hands from an early age, doing DIY with her grandfather in Fiji. After leaving school she worked at a timber processing plant – the only female among 200 employees.

She met some friends who offered to sponsor her to come to New Zealand. She took up the opportunity and moved with her young daughter. She got an opening to work in the Civil Infrastructure industry thru some close family and friends. This gave her an entrance into the infrastructure industry, starting at the bottom of the heap as a labourer.

Always with a thirst for learning and an eye on the next challenge, Laisa progressed through the ranks and after 12 years was driving 50–tonne diggers, running construction sites and training up new workers.

As with anything, with highs, you can expect lows and during that time, she experienced some hardship. With the economy in a downturn and job security within the civil industry at a significant low, she was made redundant for a few months due to the lack of work. At the same time, she was also going through a bitter divorce and lost everything including her home. She found herself flatting and living on the kindness of her friends and family. As the work picked up again, her previous employer contacted her and asked if she wanted a job operating again, which she happily accepted. Once back working full time, she started to re-evaluate the longevity of her work life in this industry and how she could better herself so that when the earthmoving season ended, she wouldn’t be on the chopping block again. At this time, she met her now-husband who encouraged her to gain qualifications. His son had just completed his training as a Line Mechanic at Electrix and had nothing but good things to say about the job and the training.

This led to an interest in line mechanics, and when an opportunity with Electrix came up she grabbed it with both hands. Laisa saw the potential to further upskill without the financial burden of full-time university study – something that was previously out of the question with a young family to provide for.

Laisa has been working in electricity supply for seven years now and has been earning while she learns ever since.

The highpoint of her training was when she took out top honours at the 2015 Annual Connection, the highlight of the electricity supply calendar. That year, Laisa was part of the first female team ever to compete at the event. She said being crowned Connexis Trainee of the Year was a welcome recognition of the hard work she had put into her apprenticeship over the previous two years.

It is easy to imagine that success comes easily to Laisa. She is now one of a small elite of glove and barrier line mechanics and one of the first females in this dangerous, high-voltage live line specialism. But to get to where she is today has taken her over 20 years, a commitment to hard work and self-learning, and a belief in the importance of sharing knowledge and best practice. Her spare room plastered with notes and photos, off limits to the rest of her family throughout her apprenticeship, is testament to the seriousness with which she takes her training.

Outdated gender stereotypes have also been something she has encountered over the years. While Laisa describes her co-workers as a “really good bunch” she said some comments, more from people on the street than from within the industry, can be “frustrating”. Her skin has got a lot thicker from working in the field and she stresses the need to be “straight up”.

The industry has opened its eyes to the benefits of having more women on the payroll, helped along by pioneers like Laisa. The skills they have brought to the industry have led many companies to actively recruit women. Of the eight apprentices taken on by Electrix in Laisa’s cohort, nearly half were women. Electrix has also set up a mentoring programme, where female trainees are paired up with women that are already established within the industry.

This shift is for good reason Laisa believes. She says women bring a fresh perspective, challenging the old ideas and helping to devise more efficient, safer ways of doing things. She also thinks they bring a greater emphasis on emotional wellbeing, something that was lacking in the industry previously.

Laisa believes the industry has a lot to offer women as well. She has always had a love of the outdoors and through her job has had the chance to travel extensively, to beautiful and often remote spots. She also loves that she has met and made friends with such a wide range of people, many of whom she would never have come across outside of the industry. There are so many career paths open to people in the industry too, Laisa says, with a chance to move into management roles later in your career.

And don’t be put off if you’re not physically big or strong. New, safer practices that encourage teamwork and the use of machinery are one of the changes that has come as more women enter the industry, Laisa says. What you do need, she says, is a network of like-minded people that you can go to when you need emotional, not physical, support.