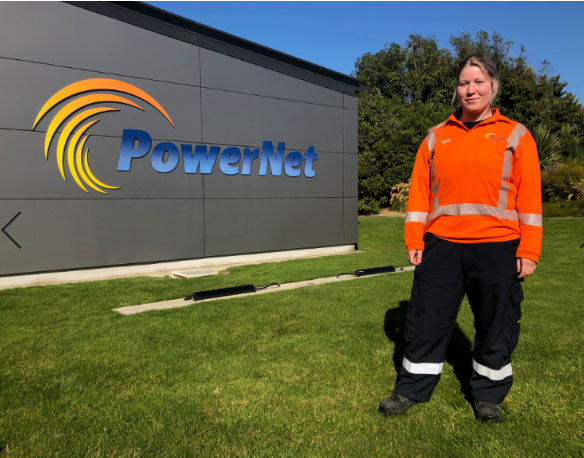 A career in an industry with loads of variety was high on the wish-list for Invercargill’s Symarah Bennett-Young.

And it’s something her role as an apprentice substation maintainer at PowerNet is serving up in spades.

Symarah, 22, got her first taste of the industry when she was 15 – taking an electronics class at Southland Girls’ High School, where she got to work on amazing projects like solar powered fans, and programme miniature electronic cars.

Last year she attended the Girls with Hi-Vis event held at PowerNet, which further sparked her interest in the energy industry.

Symarah highly recommends Girls with Hi-Vis events and says that’s where she first found out about the job she now has – through talking to PowerNet staff.

She’d never seen a transformer before, and loved getting a ride in a bucket truck, trying on personal protective gear, and changing fuses.

“I thought it was really good, especially as they get you out and about in the field. They get you right in there doing it.”

She started as an apprentice substation maintainer in early 2019 after completing a pre-trade electrical engineering course at the Southern Institute of Technology (SIT) in 2018.

She had previously taken some time out after finishing school to weigh up her options, before deciding to study at SIT, and then apply for the job at PowerNet.

“It was one year of full-on study, but was always in the back of my mind. I didn’t just want to jump into something and be in all this debt.”

She received the PowerNet sponsored award at SIT for the most improved student on the course.

“That was a real bonus, and helped get me to where I am.”

She believes winning the award helped get her noticed – and didn’t do her any harm in the job application process, either.

“I wanted to do something that had an apprenticeship, so I could work and learn at the same time.”

She was out in the field from the first day – and says watching, listening and learning have been a big focus during her first couple of months.

Her main task at the moment is assisting with substation checks.

“I find it interesting, because (the energy industry is) something that not a lot of people know about.”

She really enjoys working with her PowerNet colleagues and loves getting out and about.

“I’m an outdoors person and need variety in my work – that’s the biggest thing. This job has lots of variety.”

Away from work, Symarah plays hockey and social netball, and enjoys fishing, and deer hunting.

“We go up to Twizel in the canals. That’s pretty exciting. We go for salmon, but there’s some big trout up there too.”

She plans to get her teeth into her appreticeship – including night classes – and learn all the different aspects of her role.

“I just want to finish my apprenticeship and see where that takes me,” she says.

Her advice to others is to ask lots of questions about different education options, industries and companies when trying to make up your mind about what to study or where to work.

“It’s great that there’s opportunities for anyone to get into awesome industries like this one,” Symarah says.