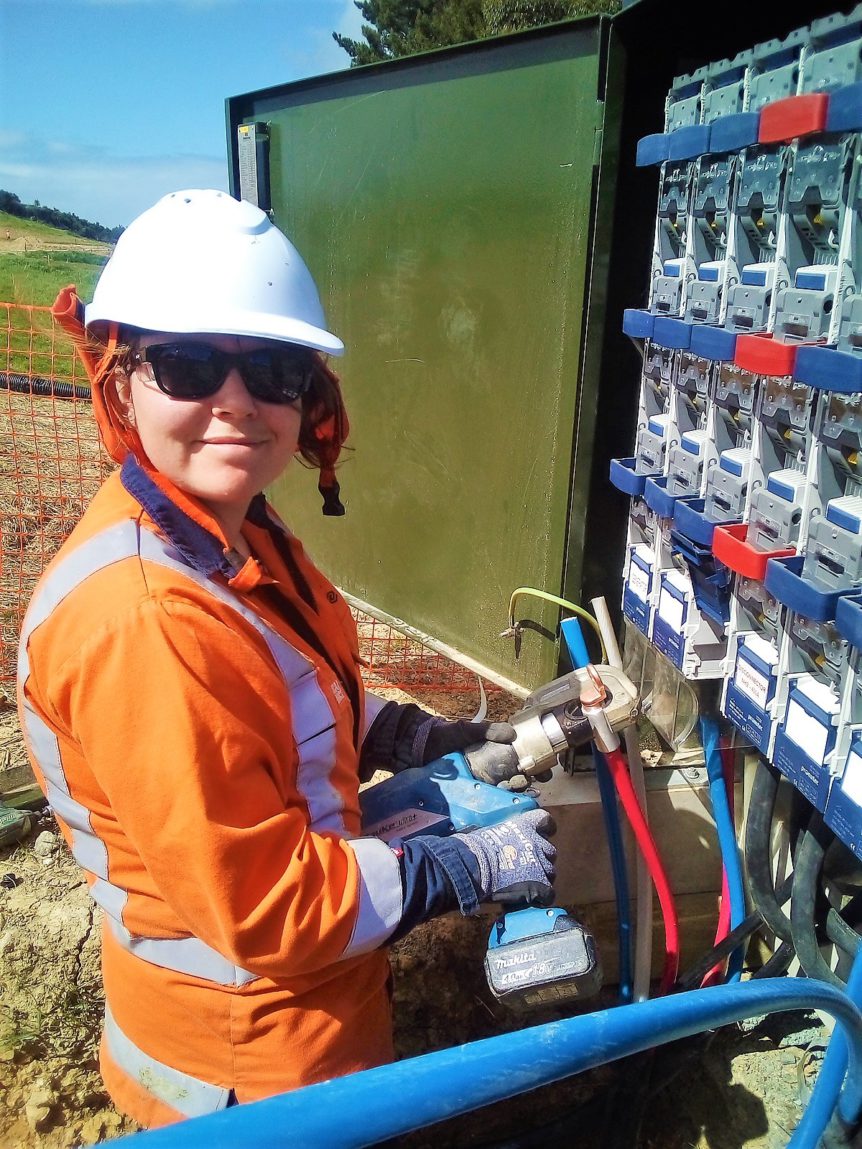 Operating a crane and driving a truck certainly weren’t skills that Connexis Ultimit Ambassador Tara Treherne ever imagined would be in her career repertoire, but they are.

The Auckland based 30-year-old stepped outside the traditional career box for women to begin with by becoming a domestic electrician and now works for Electrix in energy supply where women are even more scarce. “I’ve been qualified as an electrician for 4 years now and started off working in domestic houses.  I applied for the Electrix role by chance after the business I was working for closed down.

“I never thought I’d do this sort of work but I absolutely love it.  I’ve gained so many skills that I’d never imagined I’d have, as a female it’s a very rewarding and a confidence building experience.”

Tara’s interest in becoming an electrician stems back to her school days but due to the lack of information and guidance for women into this career path she waived it aside for a while. “I returned from my O/E, had no qualifications and was working in an office I hated it.  Some of my male friends had become builders and plumbers and loved it.  So I decided to become an electrician.  It appealed that I wouldn’t be stuck inside in an office all day and there was a good mix of ‘hands on’ work.”

The road forward in her chosen career wasn’t easy to begin with though for Tara but she persevered.  Tara felt that she wasn’t being taken seriously after being turned down for two apprenticeship jobs she applied, so she took a different approach.  “I decided to do my theory first so I studied full time for a year to get all my theory credits, which isn’t the way you usually do it, but it worked, and once I had that completed I was offered my first job as an electrician.

“I was the only female in the class.  I even got asked by one the guys doing the course if I was sure I was in the right place! I replied if this is the class for electricians, then yes I am. Even now people often think I’m an apprentice, but I’m not I’m fully qualified.”

While females don’t often choose an electrician as a career, it’s even rarer for women to be working in a distribution setting.  Tara’s day-to-day work involves working on housing sub-divisions installing underground cabling, which is then linked to the likes of transformers and underground pits to supply houses.

“We’ve just finished working on a massive shut down in Mt Roskill, there were 60 staff from Electrix there. We’d been working on transferring from overhead electricity supply to underground.  The day came when we changed it over, it was such an incredible environment, great to be involved and to see months of work finally put to the test,” Tara says.

The mother of one says that she loves being in distribution and wouldn’t go back to domestic work.  “There is so much to learn, every day I learn something new and challenge myself. I found it a bit daunting to start with but I work with an amazing team who are very supportive.

“As a team we’re good at working with each other’s strengths, as a female I obviously have physical limitations when it comes to heavy lifting.  If it’s too heavy for me one of the team doesn’t mind stepping in for me, I then do some of the paperwork so it all works out in the end.  The team environment is really empowering.”

Tara says that working in a mostly male environment has its challenges but her confidence is growing and is continuing to grow.  “I’d never picked up the likes of a drill before and I had to learn with all the eyes on me watching, it was hard.  It is one of the biggest challenges knowing you’re constantly being judged, but as time goes on your confidence grows and I now find it empowering.

“Often the guys just jump in without thinking, it’s instinctive I think at times.  Like when one of the trucks needed a tricky reversing manoeuvre and one of the team said he’d do it.  I said I would be fine and I was!”

Tara’s always been keen to get behind the wheel of a truck and is proud to say that she’s now licenced to drive Class 2 trucks, the biggest there are on the job.

Tara adds that she’s happy where she is at the moment but does have ambition for other roles within the electricity supply industry.  “Coming from domestic work, there’s so much to learn about distribution, so I’ll stay put for another couple of years at least before my next step.  That’s what’s great, there are definitely next steps, other jobs in the industry to aspire to, there’s a lot of different avenues to choose from which is great.”

And her advice to women considering joining the industry – “Just give it a go, take a chance, be ready to work hard, jump in and prove everyone wrong!”