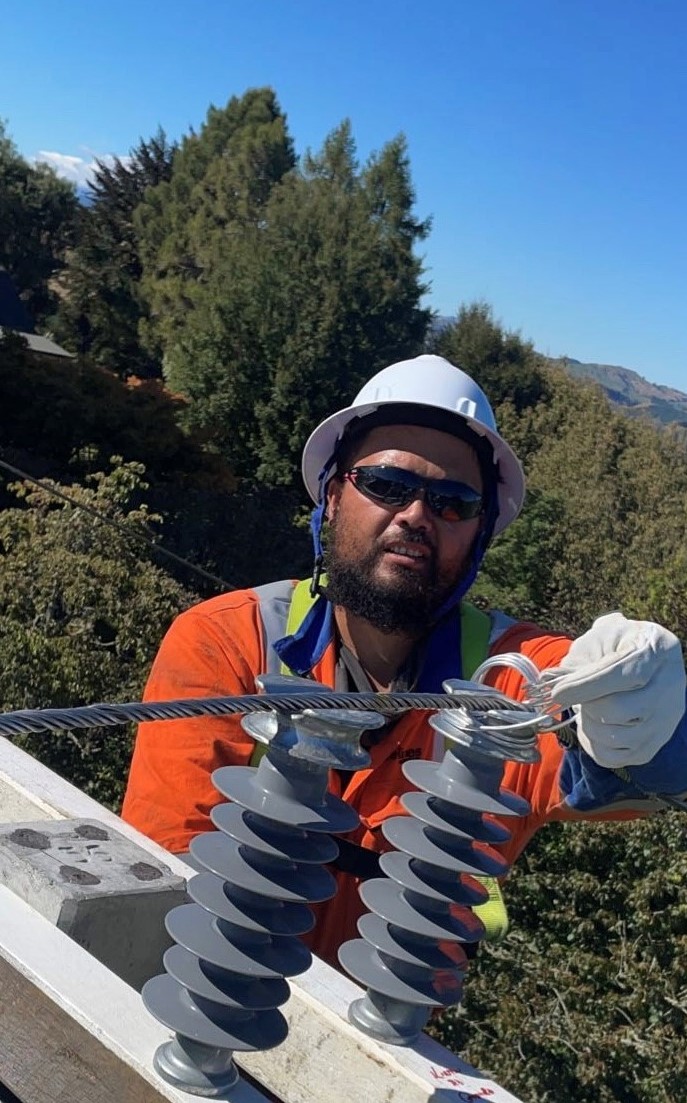 Being able to work outside is one of the things Wiremu Te Tawhero loves most about being a trainee line mechanic for King Country-based The Lines Company.

But what he hadn’t considered before starting with the company’s Taumarunui depot is that for a line mechanic, ‘outside’ can mean being up in the hills, in a helicopter, or up a pole in the middle of the bush.

“I hadn’t thought about some of the places you work in,” says Wiremu. “You only really see the power lines on the side of the road or going into houses. You don’t tend to think about the ones that run a few kilometres into the hills.”

It all adds up to a job Wiremu loves.

His passion has translated into recognition, and in 2021 he was named Distribution Trainee of the Year at the Connexis Industry Excellence Awards. The awards honour the best and brightest trainees in the energy and telecommunications sectors, as well as those who support them.

In fact, Wiremu is no stranger to working outside. Not even the heights involved in his work phase him. For several years, he worked as a scaffolder in Australia.

“When I was scaffolding in Australia, I’d be away for six weeks and then home for seven nights. Now I can spend a lot more time with the family, and be home every night,” he says.

Being a line mechanic has had benefits for Wiremu beyond that too, enabling him to work towards a qualification and be recognised for his skills. He is currently working towards the New Zealand Certificate in Electricity Supply (Line Mechanic Distribution) Level 4 through a Connexis-developed programme.

The other aspect of his job that Wiremu loves is the camaraderie that comes from working with a crew of guys he knows well. There are four people in his crew; three who are qualified and Wiremu, who is still working towards his apprenticeship. He says they all look out for each other when they’re on the job.

Being a trainee means Wiremu learns a lot from both from the guys in his crew and the wider team back at the depot. He sees the value in learning from the experience, knowledge and skills of those around him. His advice to other trainees is to “take it all in”.

“Listen to everything people are saying and have the courage to ask questions if you don’t understand something.”

Outside of work, Wiremu spends his time fishing and hunting, and taking on his workmates at golf.