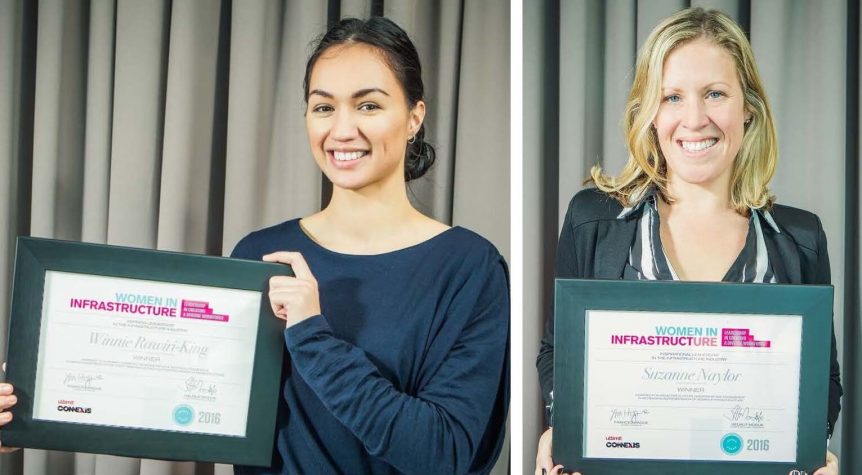 The outstanding achievements of women employed in New Zealand’s Infrastructure industry came to the stage in Wellington today. The annual Connexis ‘Celebration of Women in Infrastructure’ lunch at Te Papa recognised a group of women from around the country and their achievements in the industry over the past year.

The lunch is the highlight of the ‘Girls with Hi-Vis’ initiative, which encourages women to try out the industry. Throughout the month of June employees at Energy, Civil Construction, Water and Telecommunication Infrastructure companies invited sisters, daughters, friends and cousins to experience their industry through a ‘hands on’ day.

‘Girls with Hi-Vis’ is a component of a wider initiative called Ultimit. This is driven by Connexis in partnership with other infrastructure organisations, and aims to increase the number of women in trade and technical roles in the workforce.

Connexis CEO Helmut Modlik says, “The Infrastructure industry literally builds the foundation of New Zealand and is experiencing huge ongoing investment nationwide, as a result the requirement for skilled staff is constantly growing.

“With women representing nearly half of the population but a minor percentage of the current Industry workforce, there is a large pool of prospective employees out there. The calibre of the women recognised at today’s awards bodes well not only for their future but also the industry as a whole and will undoubtedly help attract other women to embark on a career in the Infrastructure industry.”

Connexis Board Chair Frances Hague who is the architect and driver of the Ultimit initiative is an amazing role model for the industry and recently won the ‘Inclusive Leader Gender Champion’ section of the Women in Governance Awards 2016.

Inspirational Women Awards:
recognising women in Infrastructure who are taking the lead and making a difference within their industries.

Bright Star Award:
Awarded to ‘Girls with Hi-Vis’ participant Terri Taylor who attended the Contact Energy open day at Clyde. Terri was actively engaged, illustrated a positive attitude and willingness to learn and ‘Gave it a Go’. Terri was very enthusiastic about learning more about the industry including reviewing her current career to potentially work in the Electricity Supply Industry.

Aspiring Leader Award:
Awarded to Winnie Rawiri-King from the Electricity Supply Apprentice Programme for showing leadership within her team and actively supporting Women in Infrastructure. The judges were impressed with Winnie’s commitment to Health and Safety, and leading by example.

Inspirational Leader Award:
Awarded to Suzanne Naylor from Watercare Services. The judges were particularly impressed that Suzanne was an IPENZ mentor, and the vote of confidence from Watercare in promoting her to her current role. She is a team player but also not afraid to step up to the plate as a leader.

Recognition of Contribution:
Presented to: Electrix and Northpower. Recognition of contribution to the Ultimit initiative was presented to two companies that have been a crucial part of the Ultimit journey from day one and continue to show outstanding leadership towards increasing the representation of Women in non-traditional roles.

Hear what Frances Hague and Winnie Rawiri-King had to say about the Awards in this Radio Live interview.

For further information go to www.ultimit.co.nz